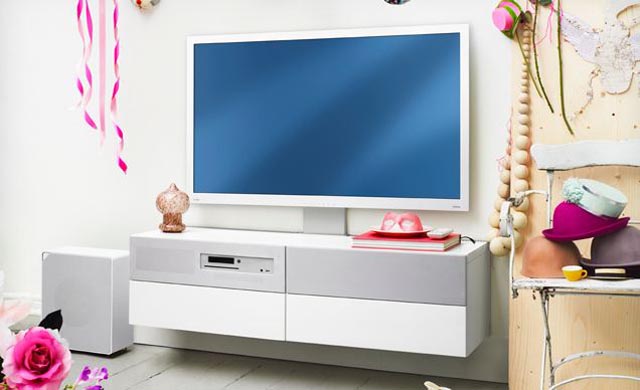 We’ve been going to IKEA for inexpensive “put it together yourself” furniture for years, getting everything from bookcases to bedframes. Now, it looks like IKEA is getting technological on us, because it’s releasing a new series of furniture that integrates LED TVs and 2.1 sound systems.

It’s called Uppleva and it means “experience.” These new home entertainment units aren’t just the pieces of furniture where you can hang your HDTV — IKEA already has that kind of thing going on — but instead, it’s a complete kit that includes the entertainment unit, of course, but it also incorporates an LED TV, 2.1 sound system (with wireless subwoofer), Wi-Fi for smart TV features, and DVD/Blu-ray players. As with all other IKEA products, you’ll get a few options for colors and configurations, but they’ll all have to be put together yourself when you get home unless you want to pay for assembly.

So, who has IKEA partnered with to make these TVs? Samsung? LG? Sony? Nope, none of the above. Instead, the Swedish company has turned to TCL of China, the same manufacturer responsible for RCA products in the United States and Alcatel products in Europe. The LED panels are presumably 1080p full HD and IKEA is saying they have a 400Hz refresh rate, four HDMI inputs, two USB ports, and DivX HD support. They’ll be offered in four sizes and work with a single remote.

Pricing for the base model starts at SEK 6,500 ($995) and it goes up from there. Initial launch is being planned this fall in Sweden, France, Italy, Poland, Spain, Denmark, Norway, and Portugal. Worldwide availability follows in spring 2013.