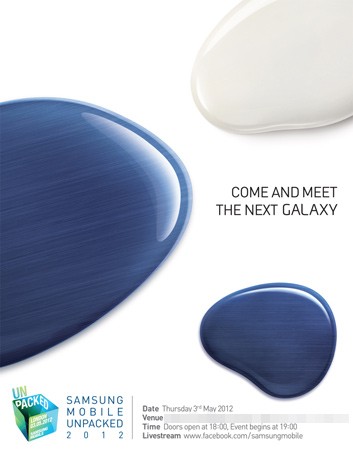 We were hoping that Samsung would officially take the wraps off the hotly anticipated Galaxy S3 smartphone at MWC, but that didn’t happen. Now, it looks like Samsung Mobile Unpacked 2012 in London will be the chosen venue for the unveiling.

This event is scheduled to take place on May 3 and the invitations have been sent out to various press and other industry folks. The biggest clue is that the invite tells potential attendees that they’ll be able to “come and meet the next Galaxy.” This presumably refers to the Galaxy S III (or S3, if you prefer), but it’s necessarily a confirmation. Maybe Samsung is expanding the Galaxy line into other areas, but I’d say the new smartphone is most likely.

Even if you’re not invited and you’re not going to be in London during that time, you can watch the announcement from the comfort of your own computer. Samsung is setting up a livestream on its Facebook page at facebook.com/samsungmobile.