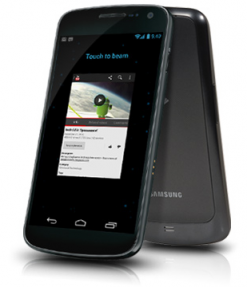 Sprint customers in need of an upgrade, start circling your calendar for April 22nd. So what makes April 22nd the ideal day for an upgrade? First off, we have the eco-friendly LG Viper getting its release that day, which was rated “platinum” by UL Environment for its sustainable build and packaging. It is also the first official 4G LTE phone from Sprint, though good luck getting 4G LTE service. At the moment, Sprint is rolling out its high speed network, but it only exists in a very lucky few cities in the United States.

Okay, Viper aside, what makes the 22nd such a big deal? How about the fact that the Galaxy Nexus will also come out on the same day for just $199, according to Sprint’s  confirmation on Twitter. For those that are interested in the Nexus, it seems that the hardware really isn’t any different from the Verizon version, with its 1.2GHz dual-core processor, 32GB internal storage, and a 5MP rear camera.

The only real advantage would be Sprint’s deeper integration with many google services such as Google Voice and Google Wallet. The big downside? Sprint is pretty much stuck on 3G, as mentioned above. Sure it has 4G LTE in select areas, but for most of us, Sprint will be relegated to slower 3G speeds- for now at least.