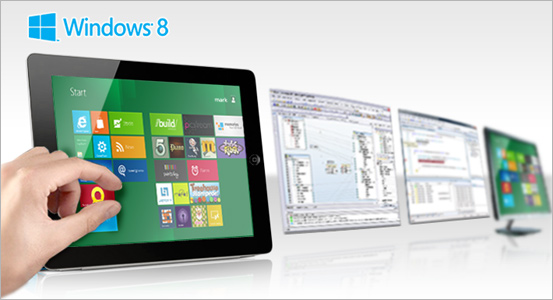 There certainly seems to be quite a wide variety of opinions when it comes to changes to the UI in Windows 8, namely the introduction of the Windows Phone-esque “Metro.” In Windows 8, you will use the Metro interface and apps, regardless of whether you own a tablet, desktop or laptop. Don’t worry though, the desktop still exists and is fully compatible with all older applications, provided your tablet or PC has an x86 processor.

When it comes to new mobile platforms, the key is to try and lure in as many big name app makers into developing for your OS. The more apps, the more reasons that a consumer has to purchase a device running a specific operating system, such as Windows 8. Up until now though, a developer had pretty much two choices:

1) Use a PC for developing Metro apps and hope everything looks great on the tablet, too.
OR
2) Invest in an x86 tablet that can run Windows 8 Consumer Preview.

This probably isn’t a big deal for some of the larger development studios, but indie developers will be happy to hear that a third option exists now. Splashtop has crafted its Win8 Metro Testbed, which is essentially software that allows developers to test out their Windows 8 Metro apps right from their iPads.

This move makes a lot of sense for developers that can’t afford, or simply refuse, to make a $500-$1000 investment on an x86 tablet for running Windows 8 Consumer Preview, and yet to still want to test options like multi-touch.

The app is on the official Apple market right now for a special introductory price of $25. Get it now if you want to test out your Metro apps on your iPad, because it will soon revert to $50. Overall, an interesting idea and at least somewhat surprising that the folks at Apple allowed this to even appear on their platform.