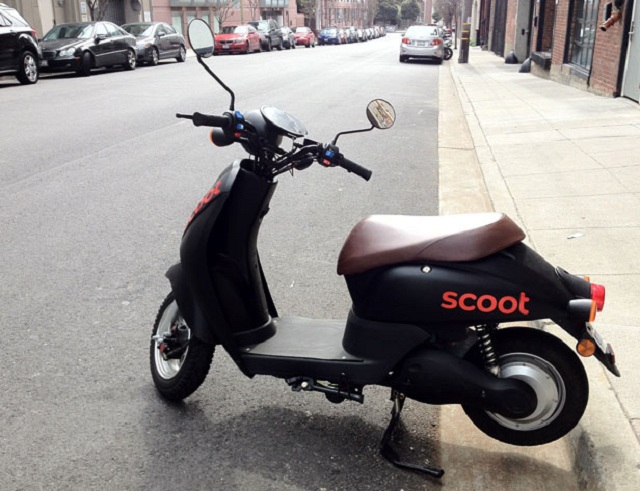 Those of you who rely so heavily on the iPhone, so much so that it is is the key to outside world, you’ll be amazed to see it’s also the key to an electric scooter. But not just any electric scooter, we are talking about the Scoot from San Francisco-based startup Scoot Networks. The company plans to rent out Scoots as a cheap and eco-friendly way to get around, and all you need is your iPhone to start the vehicle.

The company owns 20 scooters so far and is conducting a test service in San Francisco. The service is expected to be available in late 2012 or early 2013 to people 21 and older in the city. The scooters feature a plastic-covered smartphone dock, and to rent it you have to dock your iPhone (needs to have the Scoot Networks’ app) which will then act as both the scooter key and dashboard (Android phone docking will eventually arrive).

After docking, the handset will ping a server to check whether the vehicle is available and if it is, and if you are an approved rider, the server sends a code to the phone that will unlock the scooter. At present, you have to press a virtual “start” button on the device to turn the scooter on. While riding, the phone will show you your speed and range based on the battery life of the vehicle, and there will also be an on-screen map.

The Scoot will be available for $5 per hour or you can take one at 5 p.m. and return it at 9 a.m. the next day for the same price. It can reach up to 30 miles per hour and will go 25 miles on a single charge (recharging takes 6 to 8 hours).

According to the company’s founder Michael Keating, “We really do want folks to make this a big part of how they get around town. If they do, we think they’ll really like it. It’ll save them time, it’ll save them money, and it will make the whole city work better“.  And since these are small vehicles and won’t be allowed to be rented for more than 2 days, it is expected that the service will be allowed in most states.

But a few analysts believe that the business won’t become big as it will most likely become popular only in areas like university campuses and also because many would prefer a bicycle if the destination is not too far away. What do you think?  Would you scoot?