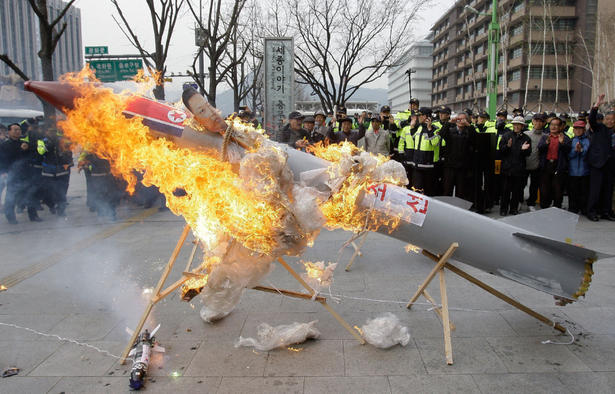 North Korea is one secretive country, but it’s first major failure under the reign of Kim Jong-un was widely observed by the United States, South Korea, and Japan: a rocket exploded a mere 80 seconds after being launched.

According to North Korea, the Taepodong-2 missile was carrying a weather satellite when it was launched at 7:39am local time this morning. The trajectory had it flying over the Yellow Sea, with the first stage landing in the sea 165km west of Seoul. Sometime thereafter, according to South Korea, the rocket was disintegrated into about 20 pieces. Boom. No more.

Yes, the official word from North Korea was that this was a peaceful rocket for the purposes of launching a satellite into orbit, but skeptics will tell you this was a “poorly-disguised missile test.” This “Unha” classification of carrier rocket reportedly has the same delivery system as the Taepodon-2 long-range ballistic missile.

To make matters worse for the new North Korean leader, this is the third failure in as many attempts to launch a long-range missile. Now, we just have to question whether these attempts are really for peaceful purposes or if they have a military-minded objective.