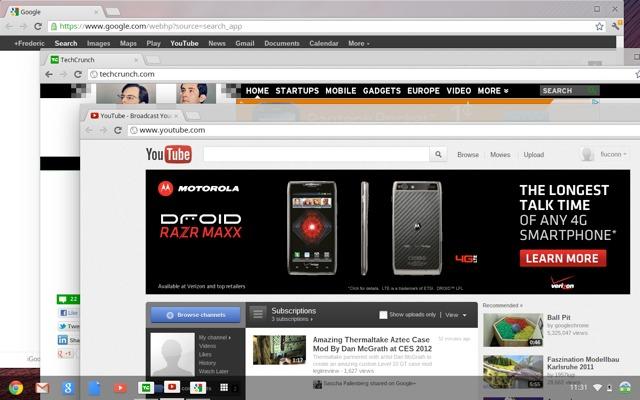 Most of us have probably already heard that Microsoft is planning to change the status quo by introducing major changes to its familiar Windows UI in Windows 8, this includes removing the traditional start button and bar. In the light of this move, Google also seems to be changing the way it thinks with its newest version of Google Chrome OS. The upcoming version does away with the one-window browser system, in favor of a brand new interface that it is called Aura. As you can see from the screenshot, it looks quite a bit like Windows 7.

There is now an actual desktop, a launching app, and a taskbar that Google calls a ‘shelf’. It is important to note though, Google Chrome OS still only uses web-based applications and doesn’t support local programs like Windows, OSX, and Linux do. Some might say that Google is admitting defeat with its design of Chrome OS, though honestly I think they are just being smart. There will be some users that might be turned off by the big changes heading to Windows 8, and Google might hope some of these users become frustrated enough to make the switch to Chrome OS instead.

Will the new Chrome OS be embraced with open arms and result in tons of conversion from Windows? Probably not, but it certainly could add at least a little more appeal to its current web-restricted OS. One thing is clear, Google is not giving up on Chrome OS yet, even if it hasn’t exactly been well-embraced by the public.