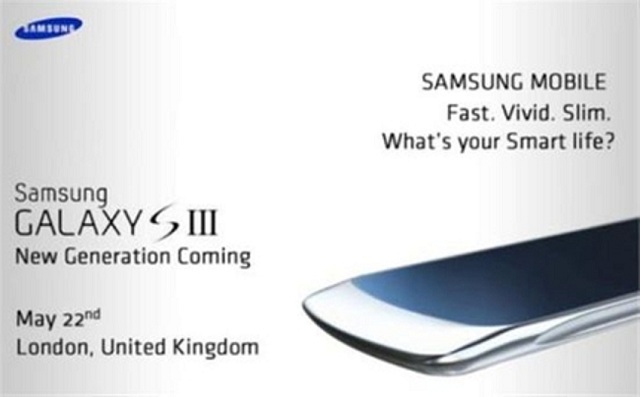 The Galaxy S 3 is expected to be Samsung’s answer to the Apple iPhone 4S and most likely will also compete against the rumored iPhone 5. We have already seen a lot of rumors regarding the release date of the much anticipated Android device, and today we have got yet another hint, which suggests that the device might indeed be unveiled next month as previously rumored.

As you may remember, we reported earlier about a leak which hinted a May 22nd London launch for the S 3. Today’s info is suggesting the same. The invitation to a launch event you see above, which shows the half of a new device, was circulated by a Korean website and the words on it are more than enough to get all Android fans excited.

We are not sure whether this is the real deal, but looking at the image, we can see that the render is not exaggerated like some previous renders. Not too much about the handset is shown, possibly to let everyone imagine about what the handset will look like and get excited, if the render is real that is.

This is what Eldar Murtazin has to say on the matter (via Twitter): “My comment about this sgs3 pic….hmmm no comments 🙂 what do u think? Real or fake?”.

That combination of “no comments” with a smiley face might be his way of confirming things.

There are no hints about the specs of the handset, but we do know that it will have a quad-core processor. Previous rumors have suggested that the S3 will come with ICS, a 4.7-inch Super AMOLED Plus HD display, 2GB of RAM, and a 2250mAh battery.