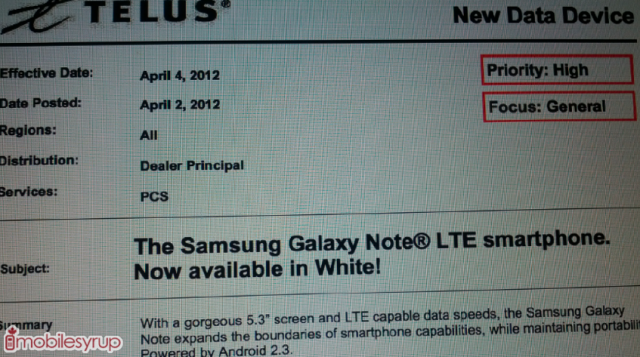 The Samsung Galaxy Note is certainly an awesome device, if you have any doubt about that, click here. The LTE handset was released in Canada earlier this year, and now it appears like a white version of the Gingerbread-running Smablet (or phablet) is finally headed to the Land of the Maple Leaf.

According to the internal documents that you see here, which come to us courtesy of MobileSyrup, Telus will launch the 5.3-inch white Galaxy Note on April 4th, which, if you haven’t realized, is today. The device will have the same price tag of $199.99 with a 3-year contract or $779.99 without any strings attached.

Bell appears to have decided to launch the white ones a few days later on April 10th. The device will be priced the same – $199.99 on a 3-year contract or $729.99 outright. There are no hints about whether Rogers will be releasing the white model.

We are expecting to hear an official confirmation from both the carriers sometime soon, so stay tuned for updates.