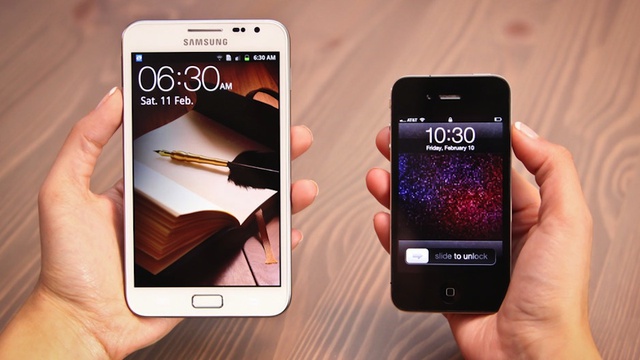 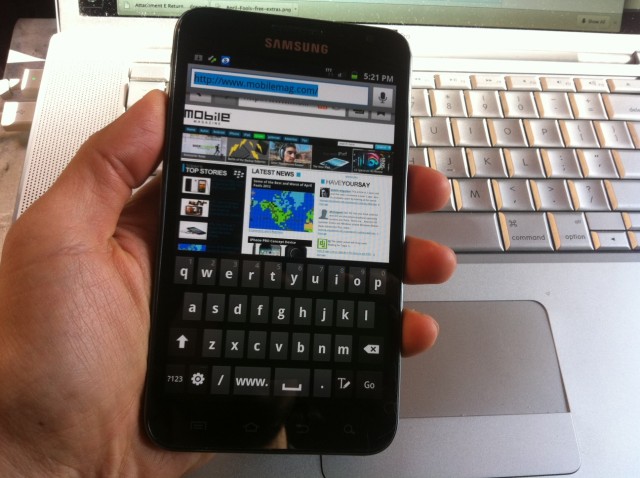 The Samsung Galaxy Note, oh what a debate this 5.3-inch Android smablet (smartphone-tablet) has created.  Some haters hate it, because, well, they love to hate things.  And others love it, mainly because of its beautiful bright display.  I’m going to address a few things with this review because in all honesty, we need to evolve the way we use “smart” devices.  And there are a lot of underlying issues that people just don’t talk about, or have a clue about. If we’re not using these devices with any sense, then we’re not really going to have the best experience in the long term.

Some people, excluding myself, have gigantic hands.  They find the puny screen of an iPhone a burden to deal with.  Try sending a text without correcting every other word, it’s not going to happen, you get pissed off and you throw the phone at a wall.  One giant construction worker finger is the size of three manicured nerd fingers put together.  So there you have it; not everyone is made the same, and not everyone can use a 3.5-inch screen without trouble.

If you love gaming on Android, the Galaxy note is the next best thing to a full-on tablet.  In fact, for many it may be better since the screen offers such a high-resolution, at 800 x 1280 on that 5.3-inches of real estate the graphics are going to be super crisp.  The design is small enough to fit in a pocket (not your shirt pocket) and easily pull out for a large and in charge session.  The dual-core 1.4GHz Cortex A9 CPU shouldn’t  be overlooked either.  That’s enough processing power to make the most out of your app experience. 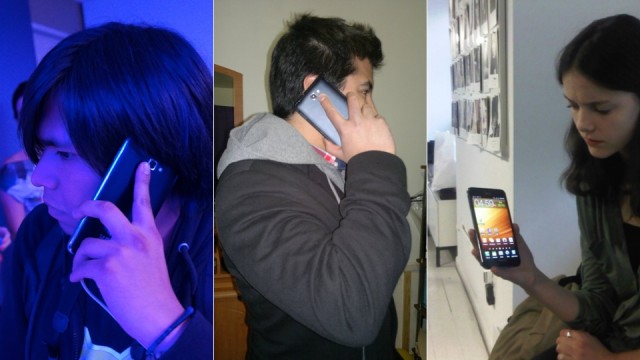 Holding this up to your head is going to look ridiculous, I will admit.  It’s a freaking giant smablet and I don’t care if you have a huge head, this thing is noticeably large and would likely induce spontaneous tourettial shouts of “freak” from any nearby watchers. But the big issue i’m going to talk about is not the size of the screen, it’s how you use it.  No but seriously, it’s SAR (Specific Absorption Rate): the rate at which radiation is absorbed by the human body. You see, the size of the Galaxy Note is actually a blessing in disguise.  When you hold up a cellphone to your head the brain gets confused and your frequencies get altered.  Since the brains software runs on electrochemical neuron signals, sometimes there’s interference.  You know how just before your cellphone rings you hear it in the car speaker, dat-dat-dat-dat-dat, well, the brain is much more sensitive than your car speakers.  And that dat-dat-dat-dat-dat is actually going to cause a duh-duh-duh-duh-duh instead.  It’s only now being shown that ADHD can be caused by cellphone use in utero. Shocking isn’t it?  And all this is on top of the already known tumor causing implications.  People have to understand that this is a mildly radioactive device, yes, r-a-d-i-o-a-c-t-i-v-e.  We know that radiation causes cancer, tumors, birth defects, and all that horrible stuff.  So what does the Galaxy Note offer?  Well, the ridiculous nature of holding this up to your head will hopefully stop you from holding it up to your head.  Yes, it’s as simple as that.  You’re going to use hands-free a heck-of-a-lot more, as well as a nice wired headset, and that’s about it.  We live primarily in an ego driven society and how things look is a big deal to many people, if you want to look cool you’re not going to hold a 5.3-inch monster phone up to your head. And by not holding it up to your head, you’re inadvertently saving your children and probably even yourself from having ADHD and tumors.  It’s a win win situation all around.

The Stylus. Oh the stylus.

Well, what can I say.  It’s a pen for your phone.  The app included is terrible, S Memo is laggy and often times unresponsive.  I found the sensitivity to be off and would skip entire letters of my script.  The games are neat, Crayon Physics is a good time waster “your aim is simply to move a red ball towards a star and collect it by drawing geometrical shapes that push the ball.”  It works well with the stylus, much better than S Memo, so i’m assuming that S Memo is just a poorly developed app and the hardware is totally functional and capable.

Depending on the network and carrier, this phone can tap in to 4G/LTE. Speed tests were 9MB up and 16.4MB down averaged out on several tests. It’s definitely up there in terms of speed. There’s absolutely no lag web browsing and its snappy.

The sheer giganticness of the Galaxy Note is wondrous.  You could call it the Android Playbook since it’s nearly there in screen size.  It’s super thin and that is what makes it a great device. If Apple were to make a 5-inch iPhone I would guarantee people would be lined up around the freaking mall.  Oh wait, people already line up no matter what crapple puts out.  Ok forget that notion.  But if Apple were really to make a 5-incher, you could imagine how amazing it would be, revolutionary, “your life will never be the same.”  Since it was Samsung and not Apple, you’re going to get the fanboys hating this device for everything its worth.  Some people have a notion that if Apple didn’t do it first, it isn’t right.  Whether they will admit that to you or not is another story, but the company is known for creating fanaticism amongst their users.  Why else would Ashton Kutcher play Steve Jobs?? That’s a big WTF if you ask me.  Ashton Kutcher is an amazing actor don’t get me wrong, but you can see what audience this movie is going to target already, and i’m pretty curious what kind of spin they will put on his biography.

It’s a gigantic Android phone with a 5.3-inch screen.  One of the best Android devices Samsung has ever made. Once you use it, it will be hard as hell to go back to a small screen. And it’s fast as hell too, and the battery life is phenomenal with 2500 mAh of power. You would think it’d be terrible because the screen size just big, to the contrary. I streamed Money Masters for 3.5 hours over 4G full screen and still had 30% battery remaining. That’s impressive even from a regular sized smartphone standard.  I remember streaming the TechCrunch Disrupt keynote over 3G on a DROID 3 driving to San Francisco because I was late and that thing was nearly dead in 45 minutes.  If you’re in this for a big screen because you like to read websites without pinching and zooming all the time, you have gigantic bear paw hands and are sick and tired of punching in the wrong text, or all your friends have an iPhone 4 and you want to precipitate the size of their balls along with their presence, you’re going to love the Galaxy Note.