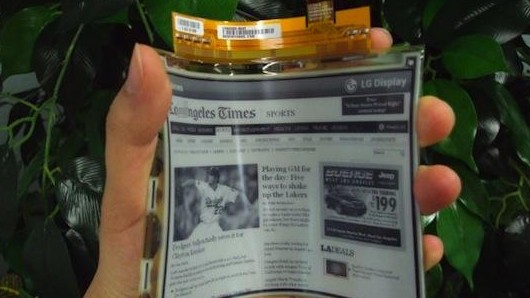 Flexible e-paper is an interesting concept, but largely none of the major companies have really done much with it, at least not until now. LG has announced that its six-inch XGA resolution Electronic Paper Display is in full production and on its way to the market in places like Europe within just a month. The new EPD is, at least according to LG, the world’s first mass produced flexible e-paper design and manages to come in at only .027-inches thick. It also weighs a lot less than glass EPDs at just .49 ounces.

As far as flexibility is concerned, the device can bend as much as 40 degrees from the plane of the display, though it is still far away from being foldable, though at the today’s rate of technological advancement it’s only a matter of time.  So begins a new era of flexible e-paper displays with LG sending its display to Chinese ODMs and a plan to supply to the product to Europe by the beginning of May. While this is a pretty exciting move, it is likely just the beginning of the flexible display era. What I’m really waiting for is fully flexible tablets and smartphones like we’ve seen in various concept videos over the course of the last year or so.