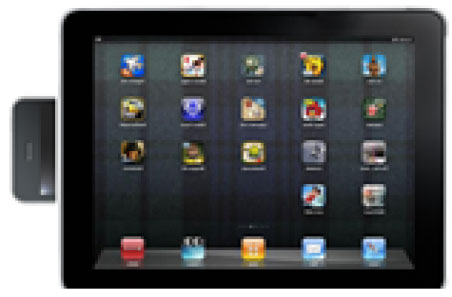 Do you remember the Motorola Atrix 4G and how it had that laptop dock? You know about the PadFone from Asus that has a slot in the back to take your smartphone? Well, the Exotablet is fundamentally the same idea, except for Apple iDevices.

What you get with the ExoTablet is a device that “instantly converts a smartphone into a full-size, full-power, all-singing, all-dancing very connected tablet.” You simply slide your smartphone into the ExoTablet and you get the big screen experience, all without having to resync your content or use a secondary wireless connection. It’s all powered by your smartphone, not unlike the Asus PadFone. The difference is that it is more flexible, allowing for “any smartphone to be used with any of their planned range of ExoTablets.” Apparently.

To accommodate different shapes, layouts, pin connectors, and so on, they will also introduce the ExoAdapter. Each smartphone model will have its own adapter (costing a dollar or two), making it compatible with the ExoTablet. They’re even planning a range of ExoTablets in different sizes and configurations, including the possibility of built-in SSD storage. The kicker? They say that the new version could be “very possibly for iPhones and iPads” too, working “in the same ExoTablet because they both use the same operating system.”

They’re telling us that a typical ExoTablet will cost in the $150 range and the launch is being planned for October or November of this year.  We’ll wait and see if this is just vaporware or really the next best thing since..