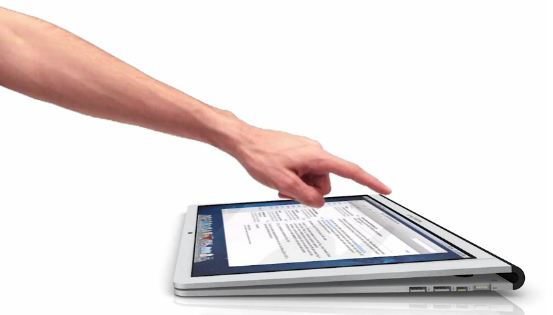 The original rumors about a possible MacBook Touch eventually manifested into what we know today as the Apple iPad. But the iPad really isn’t a true touchscreen variation on the MacBook family, because it doesn’t have a real notebook keyboard or real desktop operating system. That could change with the so-called MacBook Touch.

Yes, the name has risen to the surface once more in the form of an unofficial concept. This is not at all endorsed by Cupertino, but it could speak to the future of what Apple has in store. Basically, the designer has created what looks like a MacBook Pro (or even a MacBook Air), but has outfitted it with a touchscreen display and one crazy hinge.

The hinge can work like normal, allowing you to have the regular laptop experience, but the whole thing can fold over onto itself to give you just the straight tablet experience. The weird thing is that would mean your keyboard is now pressed up against the surface of your desk. That’s probably not such a good thing. The hinge can also go half-way, effectively turning your keyboard into a kickstand for the iPad-esque touchscreen.

It’s a neat idea and you have to give credit to the Apple-level polish of the faux ad video below, but I don’t think Apple is going to release something like this any time soon. We might just have to settle for Retina Displays in the meantime.