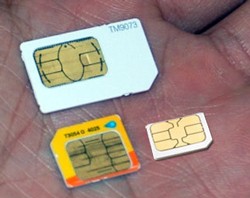 The war over a standard for nano-SIM is now in full swing as Apple is trying harder than ever to get its new standard accepted over the rival design from Nokia, Motorola and RIM. Of course Nokia, Motorola, and RIM claim that there design is better and showed concern over Apple’s smaller SIM card standard needing a special SIM card tray. It is also likely they fear that this could lead to other companies having to pay unreasonable royalty charges to Apple in order to use the technology. FOSS Patents claims that according to a reliable source, Apple has sent a letter to the European Telecoms Standards Institute stating that they are willing to offer their technology royalty free if it gets adopted as the next industry standard for smaller sized SIM cards.

Nokia has directly responded to Apple’s offer stating they still prefer their design and believe that Apple’s reasons for their offer are to undermine the other designs and standards. ETSI members are expected to decide on the current proposals sometime this week. Apple seems to already have many votes leaning towards its favor, or so it seems. Will they actually become the new standard? It wouldn’t surprise me in the least. Does that mean their standard is better? Not necessarily, many times when it comes to technology it isn’t the superior technology that wins, simply the one that is made by the company with the most industry weight, and everyone knows that Apple has plenty of weight.