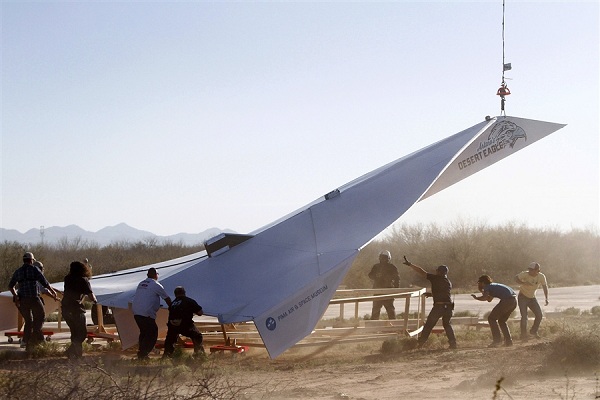 This one’s not a fake!

Remember those good old school days? Remember the crafts we used to do, including the strategic designing of paper airplanes. The wings had to be just right, and we would try so many different styles to beat our friends. Well, there’s still a little kid in all of us that’s for sure, some more than others, and that’s why the giant paper airplane flew over the Arizona desert this week.   The thing weighs in at 800 pounds, is 45 feet long, and has a wingspan of 24 feet.  It was launched by the Pima Air & Space Museum. The design of the airplane was inspired by 12-year-old Tucson resident Arturo Valdenegro, who won the paper airplane distance contest held at the museum earlier this year. That’s why it was named Arturo’s Desert Eagle. As he was the winner, Valdenegro got a chance to meet the aviation experts who worked for making the big airplane a reality.

The airplane was hoisted into the air by a helicopter and it flew from an altitude of 2,703 feet. It reached a speed of 98 miles per hour before returning to Earth. Check out the video to see the first flight.