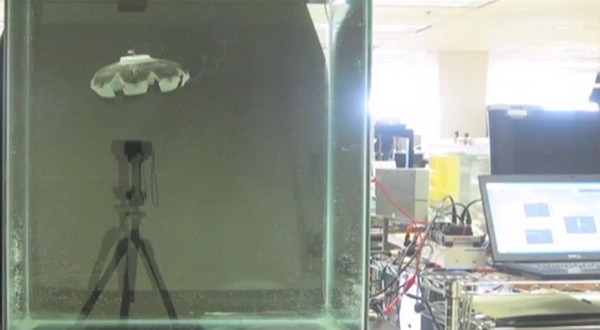 What you see in the above picture is Robojelly, a robot jellyfish designed by the researchers at Virginia Tech, which could be very useful in the future for underwater surveillance or search and rescue operations. You might be thinking that there is nothing new about a robot inspired by nature, but the robot jellyfish has a new trick up its sleeve. Theoretically, the Robojelly will go on working without ever running out of energy, as long as it’s in water.

The Robojelly is powered by hydrogen and is made up of materials called shape-memory alloys. Just in case you are preparing to refer to Wikipedia, shape-memory alloys are materials which are capable of returning to their original shape when heat is applied. The robot mimics a jellyfish’s movements via eight moving segments wrapped in platinum-coated carbon nanotubes.

When the oxygen and hydrogen in the water react with platinum powder, heat will be produced. The alloys will change shape due to this heat and propulsion occurs all thanks to the opening and closing movements of the segments.

The research paper has been published in the journal of Smart Materials and Structures and the project was led by Yonas Tadesse. According to him, “To our knowledge, this is the first successful powering of an underwater robot using external hydrogen as a fuel source”.

In the video, you will find an electricity-powered version of the Robojelly swimming in a water tank. The hydrogen-powered robot needs more work to be done on it and has only been tested while it’s clamped to the tank’s bottom. They are currently working to increase its maneuverability.

So, this is a robot which can stay underwater for a very long time as it can refuel itself from the water around it. That’s certainly very innovative. And yeah, almost forgot, the research is US Navy-backed, and you know what that means. Enemy submarines beware!