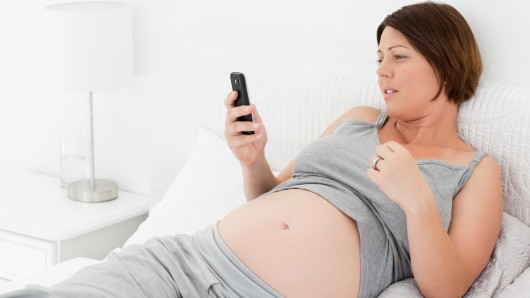 When it comes to a healthy pregnancy, women are often asked to cut out quite a few things in order to ensure the healthiest development as possible. This includes the regular things like no smoking or drinking, but it doesn’t end there. Generally it is advised that during pregnancy you avoid caffeine, too much fish intake, and…. cell phones? Believe or not, a new study claims that too much time on your mobile might lead to developmental issues in fetuses.

The research team behind the findings was led by Dr. Hugh S. Taylor, a professor and chief of the Division of Reproductive Endocrinology and Infertility in the Department of Obstetrics, Gynecology & Reproductive Sciences at Yale. Long title, short meaning: Dr. Taylor is an expert when it comes to subjects like infertility and even pregnancy related issues.

So what exactly did this team find out and what did they do to test their findings? Essentially they kept a cell phone running during the entire duration of the test. This led to cell phone radiation exposure on these rats, all of whom were pregnant. The new rodents born under near-constant exposure to cell radiation were then tested through a variety of experiments. Two groups were compared, rats that didn’t have the exposure as fetuses, and those that did.

The rats with the near-constant exposure exerted behavior that fell in line with what we refer to as ADHD. For those that don’t know, this is a behavioral disorder that manifests itself as a form of extreme hyperactivity and lack of focus and concentration. The team attributes this change to radiation hitting the prefrontal cortex while they are fetuses.

For those reading this that are expecting a little one (or if know someone who is), I wouldn’t recommend chucking that cell phone out in fear of radiation just yet. This is the first experiment to directly take a look at this potential issue and many things still need to be determined. For example, we don’t know exactly how much radiation is too much. The rodents in the experiment almost constantly had exposure, so my best advice is that if you currently use your phone 24/7 and are expecting to become pregnant (or perhaps your significant other is), then I’d cut back.

Being such an important new study, I can pretty much guarantee you that more research is yet to come. For those with possible concerns, I would simply suggest that you don’t go on 16-hour talking binges and perhaps shut off your phone or keep it a good distance away from you when not in use.

Overall an interesting study, but one study doesn’t conclusively prove anything. I am interested to see what is determined in the long run, after multiple studies, though.