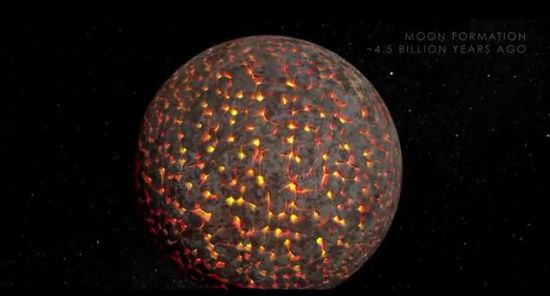 Ever since discovering Michio Kaku, I’ve become just a little more fascinated with the great beyond. I’ve come to wonder more about type one, type two, and type three civilizations, but what about the development of extraterrestial objects closer to our backyard?

NASA has just put together a fascinating video that depicts the life of our moon, starting from it was first formed an incredible 4.5 billion years ago. Shortly thereafter, and I use the term “shortly” in a relative sense, the moon began to cool down from its piping hot origins before getting continually bombarded by asteroids and other things floating around in outer space.

It almost reminds me of Missile Command on the old Atari, only this was real! Well, as real as a CG animation from NASA can be. Watching the formation of those craters is pretty neat, but of course, you wouldn’t actually hear the sounds of those impacts. In space, no one can hear you scream.