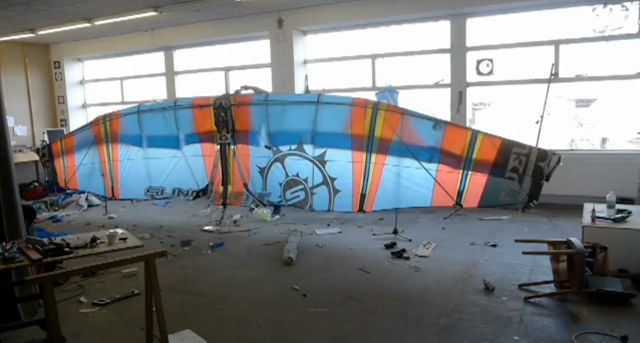 Have you ever dreamed of flapping your wings and than taking off in flight? While many of us have had dreams about stuff like this, Dutch engineer Jarno Smeets
takes things to the next level and actually does it. That’s right, he actually managed to flap his engineered wings and fly.

Smeets developed the wings over an eight-month period using a special motion mechanism built around an Android phone and Nintendo Wii controllers. The heart of it all is an Android smartphone which processes Jarno’s arm acceleration and computes the corresponding motor output. The phone is connected to a Seeduino ADK microcontroller, which connects to two Wii Motion Plus and a Wii Nunchuck. These are used to measure the acceleration, motion and all the different parameters required for making the calculations needed for the wing flapping.

Taking notes from nature, this design was inspired by the albatross:

Just like birds, humans have to amplify their locomotion to get control and get familiar with their new body expansion—the Wings. In my conception this is something which is independent of any hardware of software problem.

So he payed attention and learned how to amplify his moves, resulting in a successful test flight that took him over a distance of 328 feet. The lightweight wings are simple and strong enough to lift Jarno’s body weight.

The wings are relatively simple, they are lightweight and large enough to sustain his body when enough lift is achieved. It’s the flapping mechanism and the haptic controlling system that makes the whole thing work.

“I have always dreamed about this. But after eight months of hard work, research and testing it all payed off,” Jarno declared ecstatically. While this might not be that sustainable and seems quite tiring, it is still nothing short of amazing. Just the idea of taking off, flapping your wings, and flying is very impressive to say the least.

The video of Jarno Smeets’ flight is cool, and I don’t see evidence that it was faked. It seems reasonable to accomplish, and is something I have wanted to try for a long time. I am suspicious because there is not much detail shown of the actual machine, but that does not mean anything other than they don’t show it all. The device is also something that is only possible in recent times, given proliferation of these types of high torque, high power density brushless motors, high voltage speed controllers and lithium batteries, off the shelf carbon fiber components and so on.

As a hang glider pilot, I can tell you that this is not real.

Not even close. The roll stability and pitch stability mechanisms are not present to fly.

It takes 10hp for these to have powered flight and with that they can’t climb nearly as fast as that guy.

Update 3: Another Gizmodo reader, claiming to be a pilot argues this heavily:

Update 4: An engineer wrote to Giz about the previous “Airline Pilot” and “Glider Pilot”:

While I must admit that something doesn’t quote look “right” about that video (mainly that the contraption sure seems to gain altitude mighty quickly after “takeoff” relative to the forward groundspeed speed, but I guess the pilot is very lightweight dude, and maybe there was a good strong headwind) it is also true that the over-confidently-made arguments of the “Airline pilot” & “G.W. Meadows” do not take into account the actual construction of the wings, as shown here.

This wing is NOT a simple flexible “rogallo” type wing as the Airline pilot & hang glider expert seem to think. In fact it has a semi-rigid main aerofoil section.
The unsupported fabric trailing edge does not appear to be loaded because it is not the main source of lift.

Update 5: Wired’s Rhett Alain uses video analyzing tools to come to the conclusion that the video itself is not fake:

So, where do I stand on the issue of real or fake? I said I would leave that up to you, didn’t I? Let me just say that there is nothing in this video that indicates it must be a fake.

Rhett’s used tracking and plotting tools and argues that the wingspan is correct and would require only 15mph of head wind to achieve lift-off, supporting Jamie Hyneman’s argument.

What about the lift? Does this wingspan produce enough lift to keep the guy up? Well, that is not too easy to explore. I could look at something similar – like maybe a hang-glider. Just browsing the internet, it seems like it would have to go around 15 – 20 mph in order to not crash. What does this say about the bird-wings? Well, it could have an air speed of 15 mph – especially if there is a strong headwind. Also, this isn’t a glider. This is a flapper. 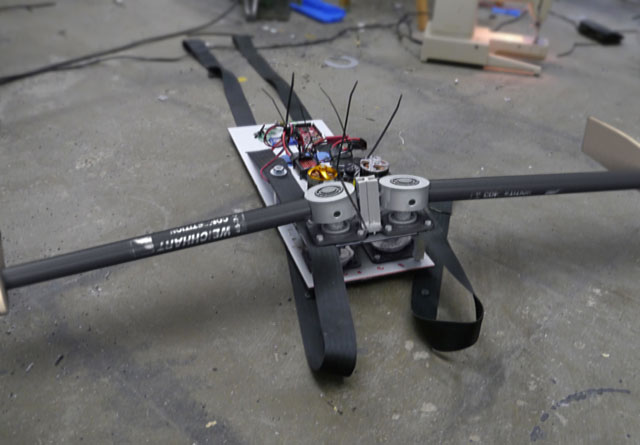