With every generation of smartphone — soon with quad-core superphones — comes bigger screens, faster GPUs and speedier network connections.  This quite often results in shorter battery life. Not to mention all the googling, random fact checking, and tweets we’re punching out, battery life is a huge issue.

With a bag full of mobile battery packs and solar chargers we set out to find the most reliable solution to keep your smartphones and other gadgets topped up for when you run out of juice on the go.

I’ve always loved the idea of solar chargers. Whether you’re on the road or at home, they can reduce your inner techie’s footprint by using nothing but the sun to keep your electronics humming along. Just leave ‘em in the sun and plug in whenever you need the juice.

It sounds flawless in theory.

In practice, though, unfortunately the solBAT II has a long way to go before it will ever be a part of this utopian ideal. The $30 solBAT’s specs sound alright: A 1500mA li-ion battery, full USB port with 5v/500mA output; a solar panel on the reverse with a suction cup cradle for easy window mounting. Indicator lights. Nothing wrong there.

So why is this not the best charger to toss into your bag to keep your mp3 player or smartphone alive for those extended mountain-trail treks? The problem is that the charger needs to be in direct sunlight for four to five days! Yes, four to five days, before you’ll have a full charge. If the solBAT II is your choice for backpacking emergencies, you might be roughing it in the woods for a business week before you can charge your cell and call for help. Considering most smartphones need to be charged daily, this doesn’t exactly match up with the schedule.

Scosche recommends charging the battery using the included USB cable for the first use. After doing so, the solBAT II only charged my iPhone 4 to 32% before dying completely. If I had waited five days for that charge, I would have been less enthusiastic about giving this backup battery a second chance.

For the second attempt, it’s been sitting in my kitchen window for two days and shows no charge on the indicator. I can’t justify giving the Scosche solBAT II more than a 3/10 for most uses. Unless you’re only taking it along to refuel non-essential, low-drain devices on the road or forgo the solar panel entirely, or you live in Africa or Arizona, it’s simply not going to cut it.

Despite the lack of solar charger, this little beast was far more impressive by comparison. At only $20 on Amazon, the GearPower’s price is right. With 2000mAh, it has more capacity than the solBAT II. Only slightly larger than a business card and 78mm (0.37 inches) thick, its tiny form factor has probably one of the best size-to-function ratios out there — perfect for keeping in your pack or purse for emergencies. The large, single button and four blue LED lights quickly let you know how much charge you’ve still got on the battery.

Depending on your phone or device’s own battery capacity, IOGEAR says the GearPower will deliver up to two full charges. In practice, it did fully charge the iPhone 4 slightly more than 1.6 times over.

The only downside of IOGEAR’s answer to the backup battery is that, of all the portable chargers we’ve tested, this is the only one without a full-size USB — likely because it’s too thin for a port that size. This means you won’t be able to use your iPod’s USB cable to charge, but rather will have to sift through the handful of adapters to find one that fits.

But, considering this is the only point really standing against the GearPower, I’d give it a solid 9/10 for price, portability and reliability.

An impressive little thing. With a 3Ah li-ion battery, two USB outputs and colour-coded charge indicator, it stands out above the other two as a more heavy-duty backup. It’s original selling price was $60, but it’s selling on Amazon for $25 at the moment, putting it in line with the other two.

What makes this one different, though, is its ability to charge two devices at once using the swing-out mini-USB arm for one and the full USB port for the other.

Despite being released in 2008, the PowerSource Mini is defending its place as a very portable, very reliable backup.

Overall, the Duracell PowerSource Mini has earned a 8/10 in our books. It does its job, and it does it well.

This one’s a heavyweight. The price is far more — $100 on the Zagg website or $56.63 with free shipping on Amazon — but you definitely get what you pay for. It’s also a lot bigger, at 3.5 x 3.5 x 1 inches, putting it at roughly the same size as a MacBook charger — something I’ve never had to make room for before tossing into my bag.

From what I can tell, though, they haven’t wasted any of that extra space or price.

The Sparq holds an astounding 6,000 mAh in its lithium polymer battery, which can be accessed via the “optimized” or “regular” USB ports. The optimized port, says Zagg, is “optimized for smartphones and devices capable of taking an optimized charge,” meaning it works at the same rate as the iPad charger as opposed to a standard computer USB. What’s more, it holds enough energy on one charge to refill most smartphones four times over. That’s enough to keep two phones running for a weekend-long road trip. Plus, with the extra capacity, it’s not only good for mp3 players and cell phones, but larger devices such as your PSP or PlayBook.

As with the solBAT II and the GearPower, it has four indicator lights and a single button to let you know how much power you have saved.

On one charge, it managed to fill the iPhone 4 twice, topped up a BlackBerry Torch from half and got up to 23 per cent on an iPad 2 before dying, earning the Sparq 2.0 a 10/10 for reliability, relative portability, efficiency and value for the price. 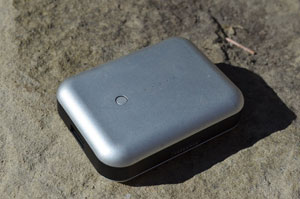 One of the more “stylish” portable battery packs for your mobile needs.  The Gum Plus from Just Mobile is for those looking for something more aesthetically pleasing and in line with the way Apple devices look.  It will match your MacBook Air, and charge your iPod, iPhone, iPad and other USB-powered devices too.  This beast has 5200 mAh of power charge and charged our iPhone to about 80% in a little over one hour.

Sure, this one is good looking, it even has LED lights that match the older generation MacBook built-in battery indicators.  It has both a regular USB port and a mini-usb for charging it up on your wall. At $80 though it’s a bit pricey.  But we still like it because its solid aluminum design means durability, which earns it a 9/10 not only for being stylish, but for packing a powerful punch.