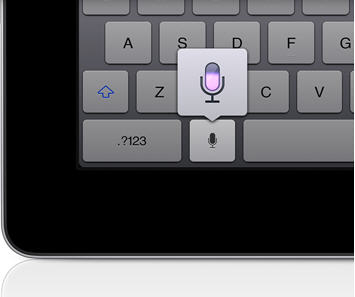 No, it’s not quite the same as having Siri, but the Dictation feature in the new iPad is still there for some of your voice recognition needs, but it turns out that it could also turn into an invasion of privacy. This is partly conjecture, to be fair, but it is still something worth noting.

Obviously enough, when you use Dictation, the audio file of your voice data is necessarily sent up to the Apple servers so that it can be processed and turned into actual words. However, it looks like some additional data is also being beamed up to complete the process. These include the names of all your contacts, as well as data about songs and other media that you may have stored on your iPad.

The rationale is that you could be wanting to write something related to the people that you know and by providing your list of contacts along with the voice file, the Apple servers can get a little more context and do a better job at doing the voice recognition stuff. Most of this gets deleted after it has served its purpose, but Apple does retain some “disassociated” data “for a period of time to generally improve Dictation and other Apples products and services.”

So, it’s probably best that you don’t use Dictation for something that you’d rather keep reasonably private, just to be sure.