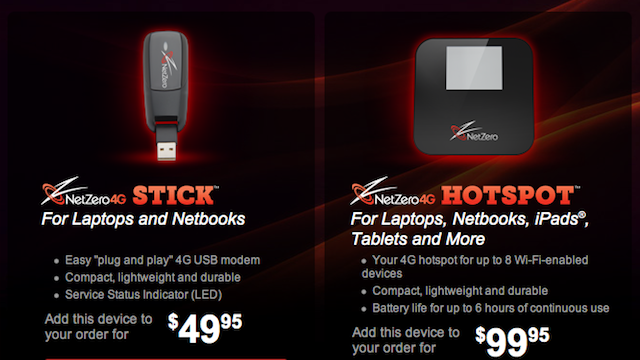 For those of you who didn’t know, there is a free ISP out there who has, since the late-90s offered completely free access to the net. Or slightly quicker access for as little as $10, the service is called “NetZero”. The problem? It is dial-up internet and only you’re grandma is going to use it. This is finally changing though, as NetZero will be offering a 4G Internet option helping it become relevant in an era where dial-up is all but extinct.

Of course there is a catch, you can’t just use any old 4G system to get onto Netzero’s ISP servers. You need NetZero equipment such as the $100 4G Hotspot, which allows up to 8 devices, or the NetZero 4G Stick for $50, meant for devices like laptops.

All the data plans can be toggled from data speeds of 1Mbps down and 384Kbps up to speeds of 10Mbps down and 1.5Mbps up. While these aren’t at all the best 4G options out there, it is not a bad idea for those who only occasionally need access to mobile data connections. It’s also great for those who don’t want any contract, allowing for start-and-stop payments whenever you actually need the mobile plan. This is great for those who travel just one or two times a year for business and want a way to get on the net while on the road.

As a former user dial-up back around in the good old year of 1996, its nice to see that the company is finally managing to get with the times. I always enjoyed NetZero and am glad to see they are finding a way to reach new users in a world that is dominated by high-speed connectivity.