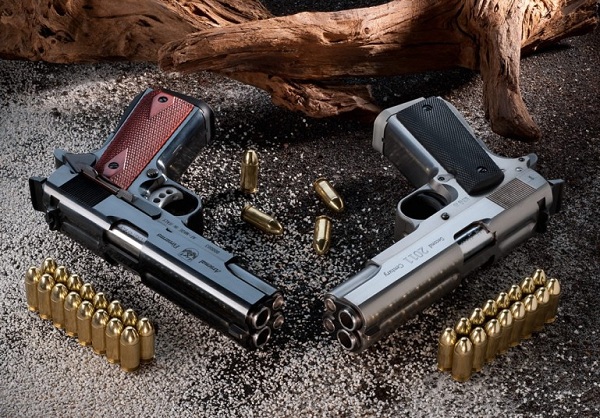 We have brought a lot of interesting new products to your attention in the past. The above product, the AF2011-A1 Double Barrel Pistol, is interesting alright, but it also looks very silly.  The handgun, from Arsenal Firearms, was designed to commemorate the 100-year anniversary of the Colt 1911-A1 and is the first .45 caliber, semiautomatic double barrel pistol built to industrial specifications.

The dual barrels allow the gun to shoot two bullets simultaneously, and it is capable of firing 16 rounds (it holds 16 .45 ACP rounds) in just three seconds. To achieve the same result, a regular 9mm pistol will take almost ten times as long (including reloading). 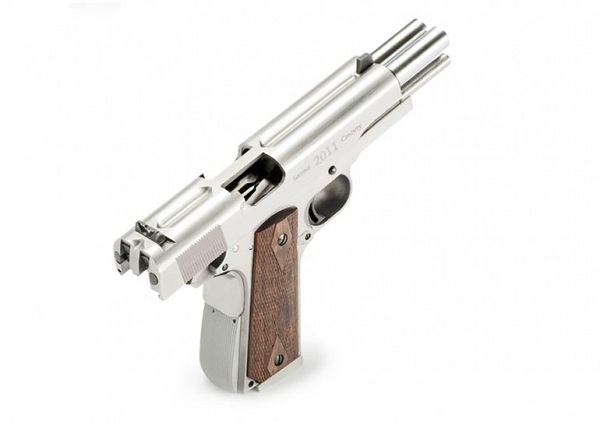 The gun uses a single slide, grip, and safety, and you will be able to customize it for using a single trigger or two separate triggers for firing each barrel independently. And parts such as firing pins, springs, and housings can be replaced with parts from a Colt 1911.

But, why exactly has this been created? If you are imagining that you will be able to shoot two people at the same time with the gun like this guy, you are totally wrong. All the 16 bullets will hit an area the size of an orange, if your target is 15 yards away. If it’s 25 yards away, the area will be the size of a watermelon.

But the punch is what this thing is all about. Two bullets totalling 460 grains of weight hitting one to two inches apart on a target can bring down a bull.  But still, why? When there are all sorts of other simpler designs (yet having the same punch) out there, why? Although the video doesn’t give you the answer, you can take a peek at the handgun in action.  Perhaps for the next generation of dirty Harry films.