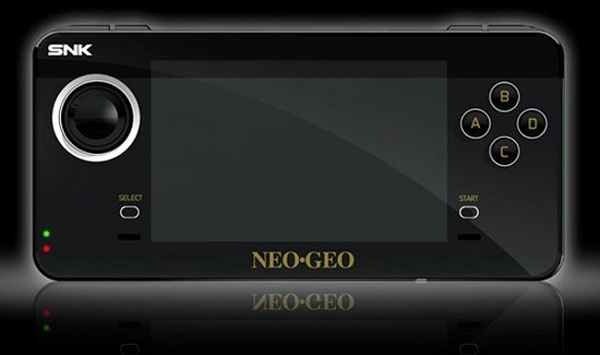 We all love the 80s and 90s, and it’s always great when something from that era comes back alive, isn’t it? What’s coming this time around is a new handheld version of a console, the Neo Geo. It has been confirmed that the Neo Geo X is coming in Q2 of 2012.

Retro games often lose their lustre, you go back 5 or 10 years later with a hope of reigniting that once lost flame, only to be left thinking, meh. It was better before. We are pretty sure that the arrival of the Neo Geo X — which will be shipping with classic Neo Geo titles on board — is going to give you a similar unsatisfied feeling.

The upcoming console will be coming equipped with a 3.5 inch LCD screen, SD card expansion, an A/V output, stereo speakers and a headphone port. Yes, a headphone port. You will be able to enjoy 20 licensed built in games (check out the titles below) and it is said to be priced “in a more affordable manner”, although it is not, unfortunately. In fact, despite what the marketers say, the Neo Geo people are going to be laughing all the way to the bank, if anyone buys it that is.

According to available info, the console has been confirmed for UK and US and it will come with a redonkulous price tag of around £500 (close to $800 USD!). That’s quite a small fortune for taking a trip down memory lane. But we know that some people might find the new handheld priceless. And those people can keep it in the closet next to the unopened Luke Skywalker action figure box while everyone else is playing real games on iPad and Android tablets.

But wait, there’s more. The new Turrican-inspired 2D shooter game named Gunlord is also coming for the Neo Geo and Dreamcast; the cartridge will cost around $570, what, did you think all the games were going to be free?

Of course, some might ask why the developers didn’t make the game for PC. Devin Coldewey over at Techcrunch has all the answers: “For the same reason some people still choose to write their novels on a typewriter, or paint with real brushes, or put their album out on vinyl. ” Or something.

Incase you have thousands of dollars burning a hole in your pocket, probably the same pocket of those Levi red tab jeans you bought in 1987 and are wearing now, then these Neo Geo X games may interest you: