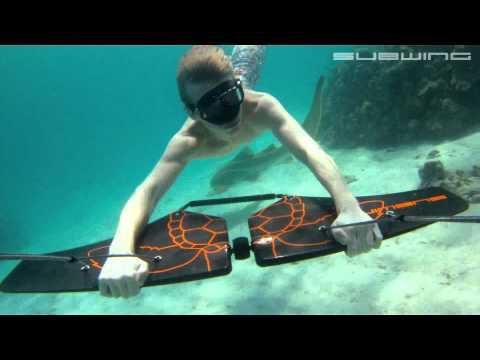 If you’ve ever tried it, you’ll know that water skiing is a heck of a lot of fun. What could be better though? Water skiing under water, maybe?

Before you start scratching your head trying to figure out what I’m talking about, I’ll spill – Subwing is a new device that essentially works a lot like a water ski except it is done underneath the water.

So the rider grabs on and is essentially drawn through the water much faster through its two wing design.

Rather than try to explain it, check out the video, it really is a pretty neat looking idea. Of course this kind of stuff never comes cheap, the fiber glass models retail for $700, while carbon fiber Subwings are $895 a pop. There is also a third version, the matte version, which comes in at $850.

While I like the idea, this looks like you could run into some serious problems.  Like drowning or being dragged through rocks and coral. Traditional water skis suite my own tastes just fine, but to each their own.