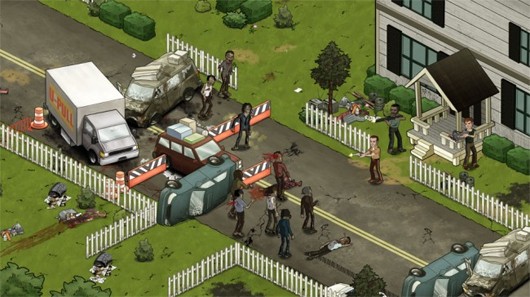 Without a doubt, The Walking Dead is one of my favorite shows on TV right now. There’s just something about that zombie apocalypse coupled with some gripping human drama that really tears at you. And bites you. And rips into your soon to be rotting flesh. So that makes me wonder why an upcoming Facebook game based on The Walking Dead is so darn colorful.

Yes, Telltale is still hard at work on another official game based on the AMC show, but RockYou and Eyes Wide Games are bringing The Walking Dead to your Facebook wall too. While you’re likely also have to engage in some zombie combat, there are really two major tasks that you’ll be doing over and over again: maintaining base camps and scavenging for supplies.

You can check out the official FB page for more info and screens, but you’ve really got to ask why on Earth they’d make this FarmVille-like undead creation. The Walking Dead is epic, gruesome, and grim. This doesn’t seem to fit in with that style at all. I guess we’ll find out when it launches in April.