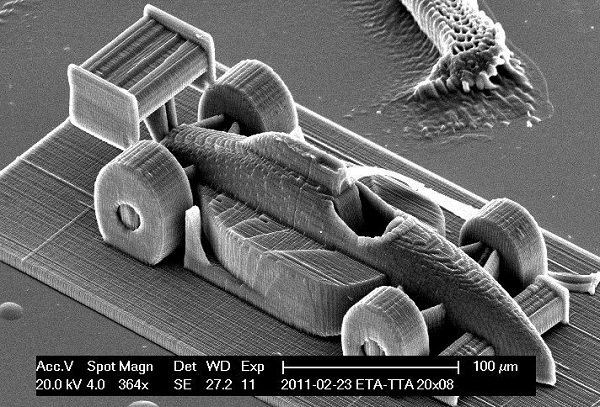 3D printing is becoming more and more popular these days and the researchers at the Vienna University of Technology have come out with an interesting development. Their new high-precision 3D printer can create nanometer-sized objects and that too in record breaking speeds. As you can see above, they have 3D printed a nanoscale racing car perfectly.

With their nano 3D printer, which is capable of creating objects no bigger than a sand grain, they have precisely created complex structures including a racing car, a model of St. Stephen’s Cathedral in Vienna, and the London Tower Bridge. That’s impressive considering the size of these objects.

The technique that they are using for making objects at this scale is known as two-photon lithography. Using a series of mirrors, the team directs a laser through a liquid resin. The laser beam hardens the liquid resin at precisely the correct spots. What you get will be a “polymerized line of solid polymer”.

The 3D printer is capable of printing 100 layers (200 lines per layer) in just 4 minutes. That’s about five meters of polymer printed in a second, which is reportedly a world record. Their biggest hurdle in the printing process was controlling the movement of the mirrors for making sure that the laser was directed precisely.

And what’s the future of all this, you ask? The researchers have started to experiment with bio-compatible resins. That means in the future, they might be able to create biological parts, which can be used in human bodies, via a 3D printer. And the technique can be used to create large 3D objects with precision and without spending too much time.

Check out the video to see the nano printing process.