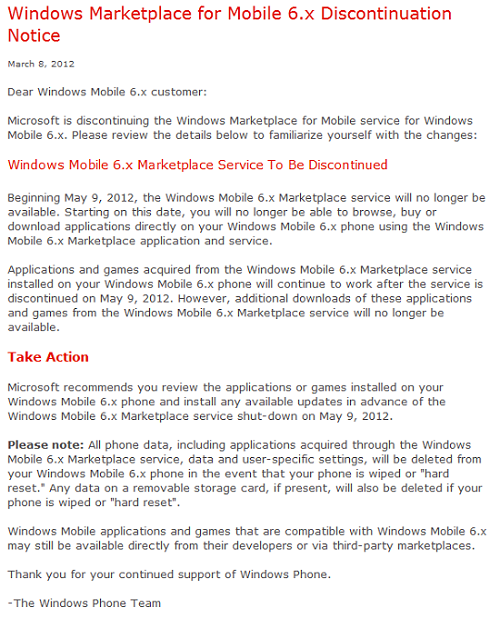 It appears like Microsoft is slowly losing their love for their Windows Mobile OS as the company is fully concentrating on the Windows Phone platform. What you see above is the full email that is being circulated to WinMo users which details about the company’s decision to officially shut down Windows Marketplace for Mobile 6.x.

According to the email, Microsoft will bring the curtains down on the Windows Mobile 6.x Marketplace on May 9, 2012. From that day onwards, customers using handsets running on the older platform as well as the developers will not be able to access the store. (In case anyone is having a doubt, the Windows Phone Marketplace will still be there.)

All the apps that are already downloaded will continue to work, although updates will not be available. Therefore Microsoft recommends WinMo users to install available updates before the service goes dark. But new applications might still be available directly from developers.

As you might know, the talks about shutting down the Windows Mobile Marketplace began last year. And the company started giving out hints regarding the matter earlier than the arrival of the email. They have stopped accepting new submissions of applications. The news about the shutdown is certainly not a surprise and most probably won’t hurt anyone, but it is a fact that Windows Mobile played a big role in the evolution of the mobile OS.

Microsoft might be hoping for the best by focussing their whole effort on making Windows Phone a success on the market currently ruled by Google’s Android and Apple’s iOS. So far, the company’s OS has failed to become popular despite good hardware from Nokia and other partners. Let’s wait and see what the future holds for them.