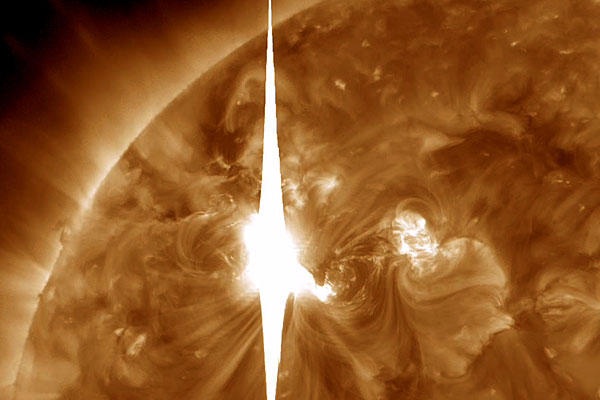 Solar storms, as you know, head towards Earth once in a while to remind us about the Sun’s incredible power. The fast-moving clouds of charged particles reached our planet this week and we are extremely lucky to be on Earth and not on Mars. Studies show that the Earth’s magnetosphere makes sure that the planet is not too affected by solar storms.

It was in 2008 that researchers got a chance to study the effects of the solar storm on two planets (Mars and Earth) at the same time and under the same solar-wind conditions. It was found that the Red Planet lost oxygen atoms in its atmosphere 10 times faster than Earth. This difference is thought to be dependent on the strength of each planet’s magnetic field. As you might know, Mars has a magnetic field that is only one-tenth as strong as Earth’s.

As scientists have long believed that the presence of a magnetic deflector shield is a good defense against charged particles from the Sun, the new results didn’t come as a surprise for the researchers.

But some discoveries made in the past few years related to the Earth’s magnetosphere have also suggested that the field is less-effective against solar storms. Studies have suggested that our planet’s magnetosphere might be transferring more energy from the solar wind to the upper part of the atmosphere when compared to smaller planets with weaker magnetospheres.

But when Mars and Earth lined up on the same side of the sun in 2008, Yong Wei, a researcher at the Max Planck Institute for Solar System Research in Germany, and his team were able to collect data on the loss of oxygen atoms from the atmospheres of both the planets. The oxygen loss at Mars was found to be 10 times higher than at Earth.

More solar storms are expected this week and the researchers are looking forward to take advantage of a present alignment between the Sun, Earth, Mars, and Venus. Venus is important in the study as the planet has a thicker atmosphere and no magnetic field.