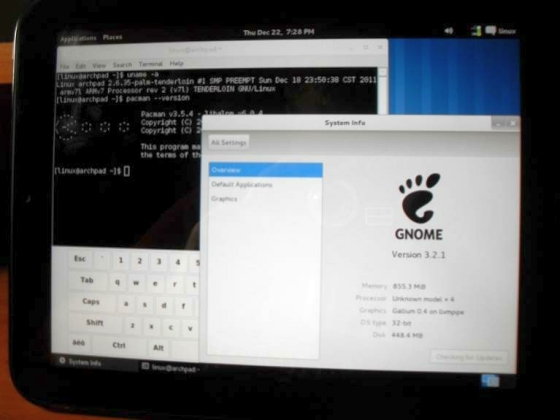 The HP TouchPad is a curious device, to say the least. It is hard to call it anything other than a failure, but it has certainly managed a fairly successful life after death, thanks in part to 2011 fire-sales of the unit by companies like Best Buy, combined with the flexibility of its hardware.

So what makes the HP TouchPad a favorite among tinkerers? The flexibility to run multiple operating systems, outside of its intended WebOS. Using a boot manager program called Moboot, many users have successfully created dual-boots between WebOS and Android. The interesting thing about the tablet is that there has been success with installing both Android 2.3 and Android 4.0 ICS.

Taking things a step further though, xda-developers forum member MikeyCriggz has posted instructions for taking a TouchPad that’s already running Android and webOS and adding Arch Linux to the mix. You’ll need Moboot installed, but the guide walks you through the process of adding Arch Linux to your tablet and adding it to the boot menu as well.

Arch is still a little rough around the edges though, with a lack of mic, camera, and sound support. Bluetooth doesn’t work either. Still, you have to applaud HP for creating such an interesting and flexible tablet. Too bad the company didn’t see the potential for the device that many in the hacker and developer communities have.