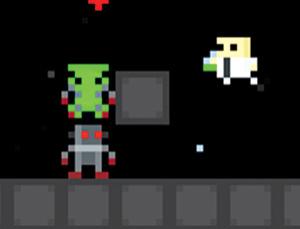 Today’s software can certainly perform magic and it’s always fun to learn about new developments, especially when it is coming with endless possibilities. The picture posted alongside is not taken from a primitive video game from the previous decade, but from a new game which has been designed almost entirely by an AI called Angelina.

The game definitely is not going to give you an experience similar to the latest iteration of Call of Duty, but still, Angelina’s Space Station Invaders is a pretty impressive work. Created by Michael Cook, a computer scientist at Imperial College London, the AI builds games using a technique called cooperative co-evolution.

In Space Station Invaders (check out the game here), you have to control a scientist for fighting off rogue robots and invading aliens to escape a space station. For the game, Angelina designed different aspects such as level layout, enemy behaviour and power-ups, and assembled them randomly. Then the AI simulated a human playing the game for determining the most effective designs. The process is repeated around 400 times for creating the best designs.

But the AI is not yet capable of creating a game all by itself, the graphics and sound effects are added by Cook. But it’s a good start and the software can be developed into something big.

And Cook has the answer for game developers who think that the AI might bring days of unemployment for them. Cook says that he likes “to think that Angelina won’t steal anyone’s job, I think it will actually be a really positive force for designers”. He believes that Angelina can be used as a tool for making improvements to games build by developers. But isn’t that what they all say? “Oh no, the robot won’t take your job at the automobile assembly line.”