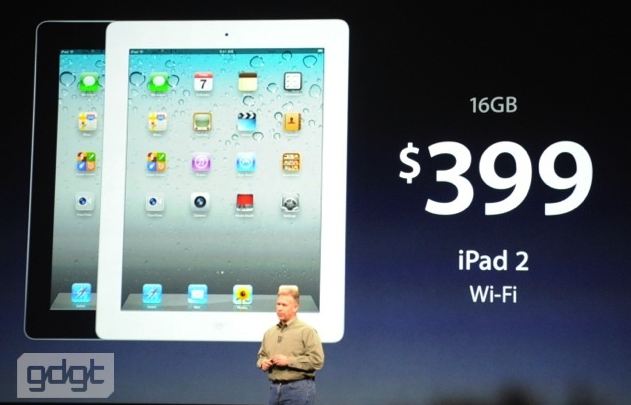 Part of the reason why the iPad and iPad 2 continued to dominate the tablet space was that most of the “good” Android tablets cost just as much as their iCounterparts and many people viewed Apple’s tablet as a premium device. The original Eee Pad Transformer made some headway by launching at $399, digging under the cheapest iPad by a full $100, but even that was met with relatively limited success.

And now the Android tablet world is being struck with another hurdle. Yes, the new iPad is all nice and shiny with its Retina Display, but the iPad 2 is sticking around and it’s getting a price cut. The 16Gb Wi-Fi model is now going to sell for just $399, making it the same price as a reduced price Sony Tablet S and making it cheaper than many Android tablets.

That’s gotta sting. For the average consumer, when they are faced with choosing between a $399 iPad 2 and a $399 Motorola Xoom, you know they’re going to lean toward the Apple side of the table. Remember that this is an entirely different proposition than the $199 Kindle Fire, but the upcoming Nexus Tablet, if it does indeed launch at $199 with Tegra 3 and ICS, could upset the balance again. For the time being, though, it looks like Apple will continue to gobble up the lion’s share of the market, even if it didn’t have to change things all over again, again.