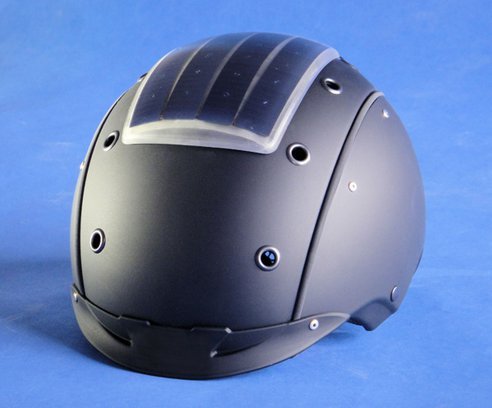 Alright, so I just have to ask, what is up with all these alternative energy chargers looking like props out of Star Wars? Not too long ago we talked about a mask that you breathe into to charge that looked suspiciously similar to a part of the storm trooper helmet. Now we have a new technology concept from Frauenhofer Institute that contains flexible solar panels that are durable enough for use in objects, such as the helmet in the picture. Okay so this is actually a ski helmet, and might not look that much like a Rebel Trooper helmet, but I still admit that after seeing the Breathe mask, this was the first thing that popped into my head at first glance.

So apparently the true conflict in Star Wars had little to do with the fall of the Republic or Jedis, the truth was that it was in fact a war waged on the best way to charge you iPhone or MP3 player. I thought I saw an Apple logo somewhere on the Deathstar, now that you mention it.

So why did the folks at the Frauenhofer Institute go with a ski helmet in the first place? It has to do with the fact that they are used in extreme temperatures which helps them optimize the performance of solar cells and the batteries. The helmets are actually heading to retail by the end of the year, or so it is reported. They will retail for about $400.