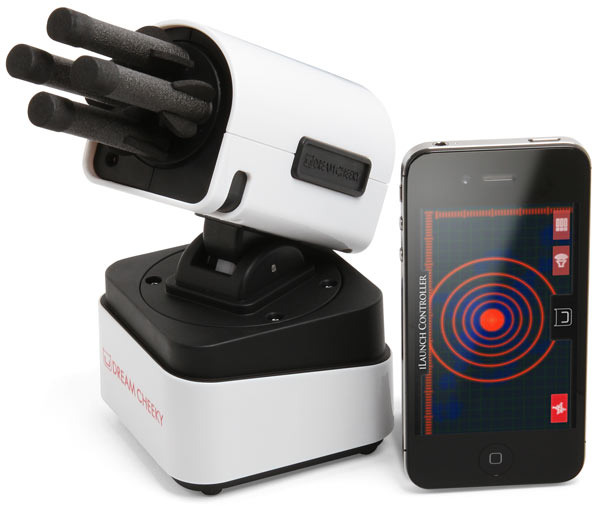 Annoying co-workers and unmanageable older brothers causing trouble in your life? Help has finally arrived, provided you own an iPhone 4S/4/3GS, or iPad/iPad2 or iPod touch (or all if you are rich and a bit crazy about all things ‘i’). The iLaunch Rocket Launcher is a weapons system which will allows you to rain darts on those who intrude your personal space; and it can be controlled with your iDevice.

Of course there are a lot of others ways to take care of the intruders, such as letting your fists do the talking. But that’s certainly not recommended as co-workers are humans who can get hurt and complain to your boss, and older brothers are usually bigger also.

The iLaunch Rocket Launcher, which allows you to take revenge on the annoying ones in an “entertaining and legal way”, will let you fire foam darts at targets as far as 25 feet away. All you have to do is get the iLaunch Controller App available free on the App Store and the launcher can be controlled via your iDevice (running iOS 5.0.1 or higher).

The iLaunch comes with air powered pistons for firing the darts and rechargeable Lithium battery which can be charged via your computer’s USB port.

But it doesn’t look like it can actually give you immunity from the annoying intruders. We have a slight feeling that it might worsen the situation, but 25 feet of range means more time for you to run to safety. Yet, firing darts will always be fun, especially if your enemy is also equipped with an iLaunch. So, are you interested in a battle? Head here if you are looking forward to playing with the $79.99 iLaunch Rocket Launcher.

Get Rid of Rockets with HyperV Slingatron Space Launcher

Video: SpaceX Grasshopper Reusable Space Rocket Shoots Up and Down