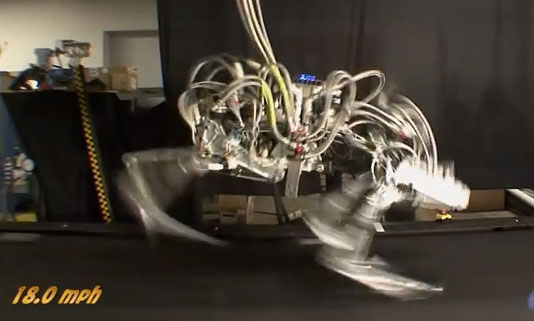 If you thought that the Big Dog was terrifying in motion (it was!), take a look at this new product from DARPA. The DARPA Cheetah is absolutely creepy when it starts moving, but it’s now the fastest legged robot on the planet and chances are you won’t outrun it.

As you will see in the video below, the DARPA Cheetah robot comes with four pointy legs, which by the way appear to be sharp and could be used to stab you to death, and it can do 18 miles an hour. That’s 5 miles faster than the fastest legged robot.

In case you are thinking about a comparison, Olympic champion Usain Bolt can sprint at around 23MPH. That means two things: It’s difficult to beat Mr. Bolt even if we are on cycles, and the DARPA Cheetah is capable of chasing you down.

According to DARPA, “The robot’s movements are designed to mimic those of fast-running animals in nature. The robot increases its stride and running speed by flexing and un-flexing its back on each step, much as an actual cheetah does”.

So, it runs like an actual cheetah. What will happen if they decide to program it to hunt like one? That will be one frightening killing machine. DARPA hasn’t announced what they are planning to do with the new product. For now, it is just meant to freak everyone out. And if they add a head to it, the robot won’t appear to be running backwards.