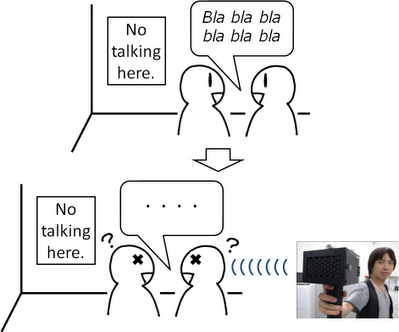 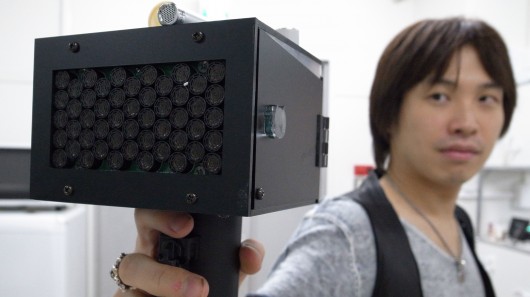 What does it take to silence someone?

For starters you have to look real intimidating and then you need to have that ‘stuff’ in you to render someone speechless.

‘SpeechJammer’ has what it takes.

A couple of Japanese scientists have come up with this portable device which can painlessly (read: without any physical contact) jam a person’s speech from as far as 30 meters away. SpeechJammer can be aimed like a gun (it looks like a gun on steroids too by the way) and once you have found your intended ‘loose mouth’, just press down that trigger-happy finger! Controlling that irritating neighbour, a boring professor or even the ever-loud boss at office will never be the same once this baby hits the market.

Here is how it works?

The inventors of SpeechJammer – Kazutaka Kurihara of National Institute of Advanced Industrial Science and Technology and Ochanomizu University’s Koji Tsukada – use a simple principle in their prototype.

It records the offending speech using an inbuilt microphone, adds a micro-second delay, and fires it back at the talker with a directional speaker. Our brains need feedback to continue the speech function and the delayed blast of speech from the SpeechJammer effectively messes with that and the person stammers to a stop as demonstrated in the video below.

The inventors claim that SpeechJammer will be the ultimate tool to subtly resolve or diffuse potential conflict situation that arises from verbal arguments. But one has to say that the rather mean looking device throws subtlety out the window. In fact, the looks of the device is so intimidating that you just need to point it and may not need to press the trigger to silence the loud mouth.

I wouldn’t take it that easily if someone stops me from talking using a ‘gun’. I would probably walk down to him and give him a piece of my mind. Since my speech may not be jammed I may be inclined to use my fists. So SpeechJammer’s conflict averting prowess may not be that affective after all as it could literally trigger a fist-fight when the whole issue would have just remained in the verbal realms.

Then there is the question of freedom of speech and how this device will hurt the free world. True again!

The device will probably come into mass production once these practical and philosophical issues are sorted out. Till then, I guess we all will have to live in a world where free speech and loud mouths (I mean politicians) rule.