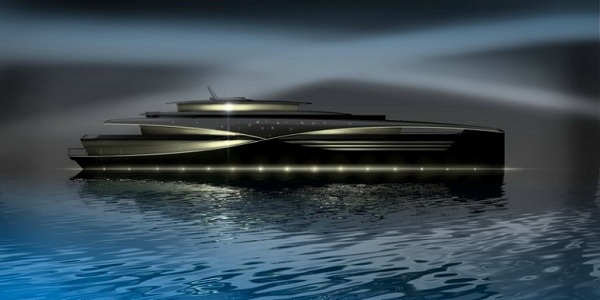 Are you frustrated about millions of dollars just lying there in your bank account? You might wanna check out the new superyacht concept from Feadship. The luxury watercraft maker has just unveiled their Future Concept vessel Qi (pronounced “chee”) which will be shown off (scale model only) at the upcoming Dubai International Boat Show.

As you might agree with us, a superyacht is called so because of two reasons: super luxury and super price tag. Therefore Feadship’s Qi, which is named after the Asian concept for life force, is indeed a superyacht.

It took a team of designers and naval architects ten months to come out with a design which includes several innovations. The 56 meter vessel is coming with a combination of main engine and diesel electric generators, which will allow it to travel with a top speed of 16 knots. At 14 knots, the Qi will have a maximum range of 5500 nautical mile.

The Qi’s wedge-shaped hull has just one main propeller (for eliminating drag) and in case there is any problem with that, there is also a separately-powered stern thruster. On the luxury side, you get to play around in a gym/spa, a movie theater, and there’s even a topside Jacuzzi which surrounds a fire pit.

But unfortunately, there are no hints on the price so far. But we do know that the company’s 44.65m yacht Helix was recently sold for around $45 million. The Qi will certainly cost even higher. If that’s going to be a problem for you, at least you can play with your own life force.

Take a peek at the gallery and the video for knowing more about the Qi.