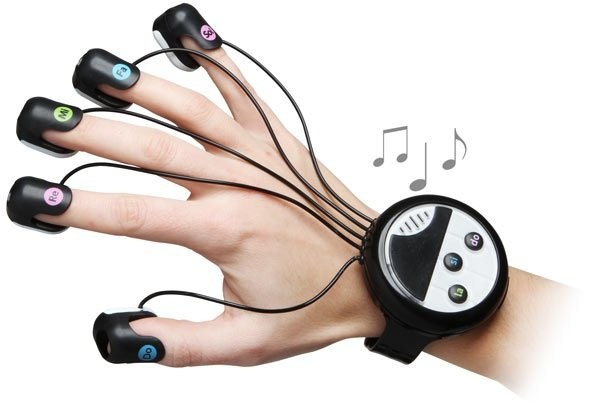 For those of you out there who love playing the piano and want to hone your skills wherever you are, there are a lot of smartphone apps. But what you see above is a new Japanese Wrist-Mounted Finger Piano which will give you an experience far better than playing on your phone’s touchscreen.

As you can see in the above image, the portable musical instrument looks sort of like a weird glove for a future gaming console. The gadget easily slips onto your wrist and you have to insert your fingers into the respective “clips”. Then you simply start playing.

When you press a finger down on a hard surface, a note will sound on the gadget’s in-built speaker. Powered by 3 x LR44 batteries, the Finger Piano comes with one full octave of notes. And you will also get to play with three volume levels and three sound banks including piano, bells and cat (no, that’s not a typo).

Although it won’t be as satisfying as playing on the real thing, at least you won’t need four people to move it around and it will be better than tapping your bare fingers on the table.

Head here if you want to get the Japanese Wrist-Mounted Finger Piano which comes with a price tag of $39.99.