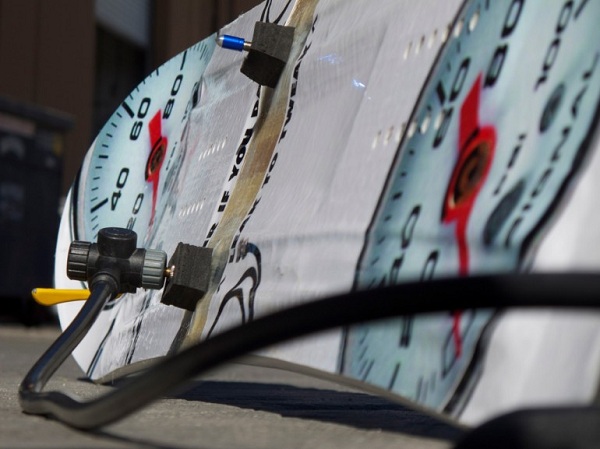 California-based snowboard company Signal Snowboards is famous for bringing out interesting new snowboard designs in their Web series “Every Third Thursday“. What they have come up with now is a snowboard dubbed “Air if you Dare” which can be inflated like a bike tire.

Signal Snowboards’ previous works include a surfboard-snowboard hybrid, the Candy Snowboard, iShred and many more. Their new design integrates inflatable inner tubes into the core of a snowboard.

Signal founder Dave Lee explains why he came up with such a design: “I was changing the tire on my wife’s road bike and I was like ‘Oh man, I could put these inner tubes in a snowboard core and change the flex or change the base structure pretty easily. I wanted to see if we could actually add air to change the form of the board. What if air could be used to take your board from a light rocker nose and tail to a heavier rocker setting for different snow days“.

Before getting inflated, the finished board is very flexible. But the inflated board added some stiffness and it actually allowed a user to spring forward with more power while performing jumps. So that’s a stiff, stable board for a big mountain and a flexible one for freestyle, all in a single “Air if you Dare”.

Although the concept is quite interesting, the inflatable snowboard won’t hit stores anytime soon. You can end up with a flat board and blowouts are also possible due to the pressure on the boards. But we are sure that these guys will solve all the issues on another Third Thursday. In the meantime, you can check out the video to take a peek at how the board was made.