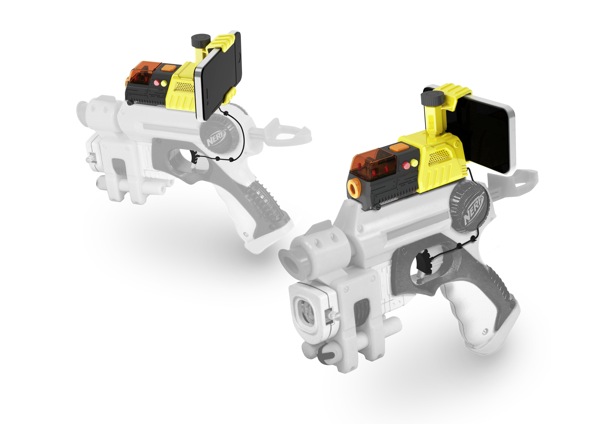 Back when I was a teen, I would often take place in long paintball sessions as a means of getting a 1st person shooter experience in real life. You got together, armed your guns, and fired carelessly at your friends. It helped that we had a large stretch of woods at my folk’s house that were perfect for long-range combat. The downside to paint-balling was that even with the proper attire, you would often end up bruised and in pain.

The alternative was laser-tag, but generally the equipment was much more expensive and impractical. Fast forward to today though, and a new way of fighting your friends is emerging. Taking advantage of the power of today’s smartphones, a unique zapper uses augmented reality to bring paintballing/tagging to the next level.

Created by Jon Atherton, the AppTag Laser Blaster attaches to your iOS or Android smartphone to put you into the augmented action. Essentially the blaster works by sending a high frequency sound that is detected by an enemy phone/gun. This noise is undetectable by both humans and animals. The attachment has a sliding bar mechanism that can hold any smartphone and comes with a pistol grip, though it should work just fine attaching to almost any toy gun with an accessory rail.

What makes this concept so novel compared to traditional laser-tagging and paintball fights is that it offers a very console-style experience using augmented realities that provide power-ups that can include more ammo, health packs, extra weapons or even special targets and objectives.

AppTag will also offer a development kit for companies that want to add support for this innovative as a new way to fight-it-out against your friends. When it officially launches the device will cost just $25 and have a few compatible apps ready to download. Atherton is also running a Kickstarter project until the 17th of March to raise funds to finalize the device and get it into the hands of consumers, sooner rather than later.