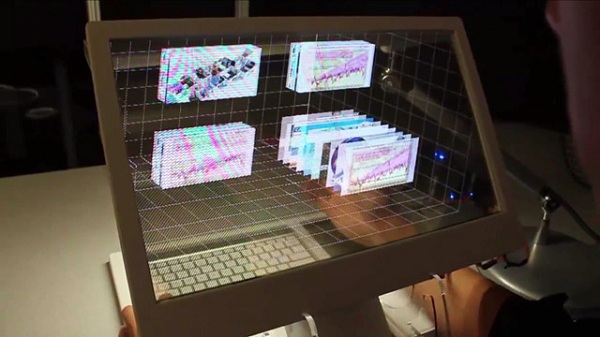 It appears like the boundaries between the physical and digital worlds are getting thinner and thinner. Microsoft’s Applied Sciences team has shown off their prototype 3D desktop which allows you to interact with the objects on a transparent screen with something called “view-dependent, depth-corrected gaze”.

The team has been studying what things they can do with a transparent Samsung OLED screen and Microsoft’s Kinect technology, along with some special software. What they have come up with is a virtual desktop which can be manipulated with the hands in real-time.

As you will see in the video clip below, there is a keyboard behind the transparent screen which does the same job as your normal computer keyboard. But to interact with the desktop, instead of using a mouse, you just have to reach up and manipulate the virtual objects with your fingers. What makes this possible is the Kinect tech.

The Kinect sensors will track where your hand is and at the same time will also detect your head and eye position for delivering a 3D image with depth and perspective based on your position. But sometimes a short clip is better than a thousand words. So check out the video below and don’t forget to place your thoughts below.

Head here to stay updated about all the things from MWC 2012.