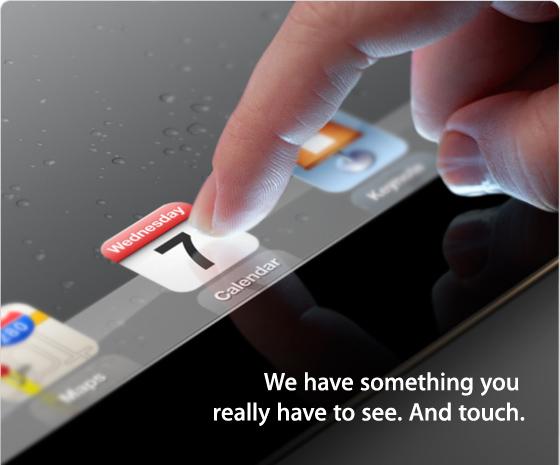 We pretty much already knew that Apple was going to reveal the new iPad 3 next month, but now we can see an official confirmation in the way of a special invitation to a special Apple event on March 7. But the invitation sent out seems to be showing something a little extra… or rather, it’s showing the lack of something.

First, the invite itself is for March 7th at 10am PST. The Apple event is scheduled to take place at the Yerba Buena Center for the Arts in San Francisco and it’s pretty safe to assume that this is for the new iPad. In the invite, we are clearly shown an iPad and the caption tells us that they’ll have something for us to see “and touch.”

Now we just have to wait for the event itself. Then, we can lay all this Retina Display, quad core, 8MP camera, 128GB version, higher price, and now no home button business to rest.