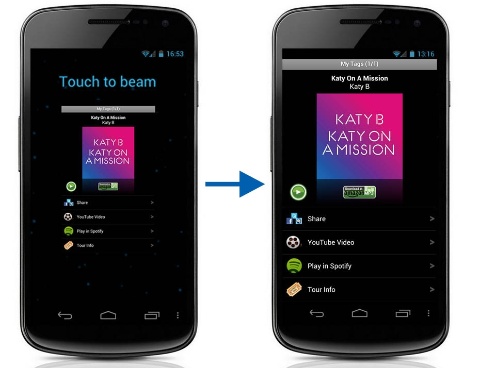 Shazam has just announced that its media discovery app is about to get a whole lot better thanks to its support of the NFC-based Android Beam technology. Now Shazam users will be able to hold their devices back-to-back with their friends to share favorite music, merchant offers and television tags.

This feature will start showing up as part of an update in the next few weeks, but of course will require ICS 4.0 to work. Outside of the beaming ability, Shazam is also going to continue providing one of the fastest tagging systems ever with further enhancements heading to the app when it updates to add Beam support.

In the meantime, feel free to check out the press release below for more information about the newest update to Shazam.

“With the adoption of Android Beam, we continue to stay at the forefront of integrating cutting-edge technology that always focuses on improving the experience of our fans.”

“We are committed to continually enhance the performance of Shazam to ensure we deliver the best experience when people use the Shazam App. With our new algorithm, Shazam fans will be able to get a tag result in as little as one second. We believe that near instant identification creates the most efficient way possible to discover, purchase and share the music, television content and brand offers that our loyal users love,” said Alex Musil, EVP Product for Shazam. “With the adoption of Android Beam, we continue to stay at the forefront of integrating cutting-edge technology that always focuses on improving the experience of our fans.”

A number of improvements have already been released for the Shazam App on Android™, including enhancements to improve recognition speed. Another significant step that will make the app even faster will be released this week on the Android operating system with iOS to follow in the coming weeks. With the new release, songs, television adverts and other content can be identified in a fraction of the time it previously took – in as little as one second, making it even faster for people to discover their favorite songs and unlock content in television shows and ads.

People who use Shazam on the new Android platform will simply be able to hold their devices back-to-back with that of their friends to share their favourite music, merchant offers and television tags – giving their friends access to music samples, coupons from advertisers, tour dates and other great information.

Android Beam makes sharing simple. Touch two NFC-enabled Android-powered phones back-to-back, then tap to beam your favourite tags across phones. If your friend doesn’t have the Shazam App, they are introduced to Android Market™ to get it. Beam will be available on NFC-enabled Android devices running on Android 4.0, Ice Cream Sandwich. The new capability is scheduled to be live in the Shazam App as part of a major update within the coming weeks.

Shazam is the world’s leading media discovery company with more than 180 million people in 200 countries and adding another 1.5 million new users each week. Shazam is the best way for people to discover, explore, buy, and share, music, TV shows and branded content.

For people who don’t yet have the Shazam application on their smartphone, it is available for every major platform and can be found on iTunes App Store, Android Market, Amazon App Store, AT&T’s AppCenter, Verizon VCast app store, Nokia Store, Windows Phone Marketplace, BlackBerry App World, and GetJar.

For further information about Shazam Entertainment visit www.shazam.com and @ShazamNews or follow us on Facebook and Google+. For daily music updates follow the Shazam Blog and @Shazam.

The Shazam, Shazam Encore, LyricPlay, Shazam for TV and Shazam Player names and icons are trademarks of Shazam Entertainment Limited.