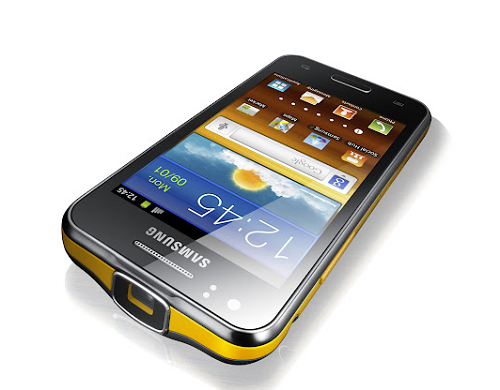 Samsung is expected to come out with a lot of exciting products at MWC 2012. But their newly unveiled Galaxy Beam handset might not impress you when it comes to the specs, although it has one trick up its sleeve. The device features a built-in pico projector.

The new device is an updated version of Samsung’s Galaxy Beam which was shown off at the Mobile World Congress in 2010. And in case you are pondering, Samsung is not the only company which has dived into the idea of a projector in a phone. Have you heard about the LG eXpo projector phone?

The original Galaxy Beam was only slated for Singapore and it came with Android v2.1, a 3.7-inch screen, and a 9 lumens projector. The updated version runs Android 2.3 Gingerbread and features a 4-inch 480×800 TFT display, a 1GHz dual-core processor, 8GB of internal memory (there’s a microSD slot for cards of up to 32GB), a 5MP rear shooter, a 1.3MP front camera and a 2000mAh battery.

That’s no HTC One X, but those who are buying this device will be looking forward to playing with its 15 lumens projector. Although that is not enough to blind anyone, it is more than enough for projecting pictures, videos, and other media onto flat surfaces. And, according to Samsung, it can display images up to 50-inches wide.

Unfortunately, we haven’t got any hints regarding the price tag and availability of the Beam. We will keep you updated. The Beam is expected to be launched in a number of countries.

And yeah, almost forgot. According to the device’s landing page, the handset has 6GB of RAM. That’s most probably a typo, but maybe not, since it could take some serious memory to power a projector.