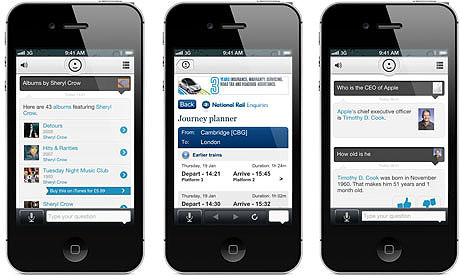 While it is hard to find a voice assistant even close to being as stable and capable as Siri, there is one app that actually comes pretty close, and that’s True Knowledge’s Evi. While the device has been known for having server connection problems here and there, I can attest to the fact that at least the Android version is very good, when I can get it to connect the server properly.

Unfortunately, it looks like the app will no longer be available on iOS, instead becoming an Android only option. No, this isn’t a choice that True Knowledge made on their own, instead one that is being enforced by Apple.

According to William Tunstall-Pedoe, the chief executive of True Knowledge, they were contacted by an Apple representative on Friday and were told that a decision had been made that the app would be removed. The reason? According to Apple it is because they are reviewing it under condition 8.3 of the App Store’s terms and conditions, which basically states that if an app appears to be confusingly similar to an existing Apple product they can ban it from the store.

While they do have quite a few similarities such as naming and even features, they also have some pretty noticeable differences, like Evi’s apparently more robust ability to handle various accents, something that iPhone’s SIRI seems to have trouble with.

Evi has barely even reached the one-month-old mark and yet it has managed to reach about half a million downloads, which are rather evenly split between iOS and Android users. While this might not be that big of a deal for 4S owners, it might be disappointing for those who own older versions of the iPhone or iPad that used Evi as a very capable substitute.

For now, the app is still available in iOS, but it is unclear how much longer it will be before the company decides to take it down. So if you’ve considered Evi on your iOS device before, now might be a great time to get it before it’s too late.