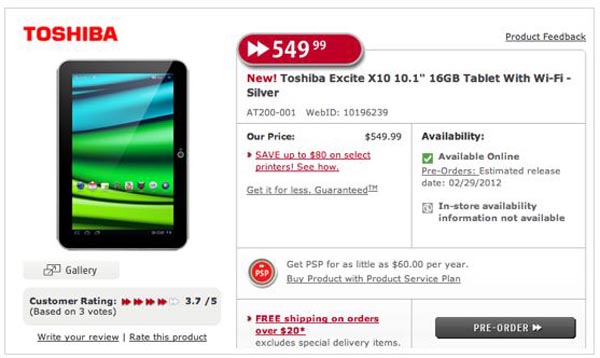 The tablet market is continuing to evolve and mature, but we’re still getting inundated with a bunch of Android tablets that are almost exactly the same. The upcoming Excite X10 from Toshiba doesn’t exactly buck the trend, but you may be interested to hear that it’s tentatively scheduled to hit store shelves by the end of the month. That’s just a few days away.

The new Android 3.2 Honeycomb powered tablet has appeared on the Future Shop website in Canada, being offered up for pre-order. The product page is showing an “estimated” release date of February 29th. Much like its predecessors, this tablet will also be shipping in 16GB and 32GB flavors.

The rest of the specs sound like they’re par for last year’s course, coming with a 10.1-inch (1280×800) display, a 1.2GHz processor, 2MP front camera, and a 5MP rear camera. Given the push toward more cores, faster clock speeds, better cameras, and ICS, the Excite X10 doesn’t exactly get me excited. The pricing doesn’t help either with 16GB and 32GB models listing for $550 and $600, respectively. You can get a Sony Tablet S or Eee Pad Transformer for much less than that.