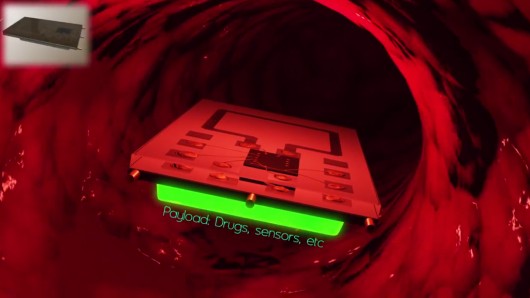 The 1966 Sci-fi movie Fantastic Voyage was something wasn’t it? A shrink ray let a CIA agent and a pilot enter the human body to perform a life saving procedure to remove a clot.  Miniature rays and pilots willing to get shrunk to get inside the human body are likely to remain in science fiction, but electronic implants, tiny enough to be able to travel through the blood stream, may become a common thing in the near future.

The biggest hurdle which held back scientists from exploring the limitless possibilities of such devices was a power source tiny enough to go with the micro-mini implant and reliable enough to power it while inside the human body.

Engineers at Stanford University have managed to overcome this hurdle. They have developed a prototype of a tiny, self-propelled device which is powered wirelessly from outside the body.  Technology, which allows miniaturizing of electronic and mechanical components has been there for a while. Scientists were however handicapped by one major hurdle, a reliable power source.

Earlier, implants such as pacemakers were stationary. But energy source was a major concern for these devices too as battery occupied the bulk of their architecture limiting the space for electronics required for them to do their intended job. Regular battery changes were the order of the day, inconvenient for both the patient and the physicians.

Stanford engineers have removed the battery out of the equation altogether and are using wireless electromagnetic power transfer.   Untill now scientists were held back by the notion that the human body doesn’t conduct high frequency waves that well. The higher the frequency the smaller the antennas for transferring it would be. This is where Stanford electrical engineer Ada Poon made her ground breaking discovery. She realized that the human body conducted high frequency waves much better than previously thought and she then focused her work on developing an antenna which was tiny enough to fit into a device small enough for a voyage through the blood vessel.

“When we extended things to higher frequencies we realized that the optimal frequency for wireless powering is actually around one gigahertz, about 100 times higher than previously thought,” said Poon, who developed an antenna of coiled wire 100 times smaller but capable of receiving power from a radio transmitter outside the body.

The research indeed throws open a lot of possibilities in the medical field. It promises to arm doctors with devices which can be directed through to blood stream to specific areas where life saving procedures like removing clots can be performed.

The voyage has just begun and a fantastic one it promises to be.