In Football, if you mistake your opponent’s head for the ball, you are out of the game. In Baseball, if you test the strength of your bat on the head of your opponent, you might not play ever again. In Ultimate Tazer Ball, if you pass an electric current through your opponent’s body with a stun gun, you may just end up being player of the game. The sport actually lets you cause serious injuries to the members of the opposing team, sounds perfect. 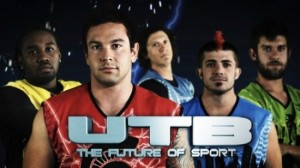 But it’s not only about stun guns, although that is the only thing that makes the sport a bit interesting. A ball, which looks similar to a huge beachball, is also involved and the players have to simply run around with the ball (for putting it into the opponent’s net) and in between make sure that they do not get tasered.

The rules of the sport are not very complicated. You have two teams with four players each competing for getting the ball into the opposing team’s net. Only the player who is carrying the ball can be given the shock treatment. Well, that’s about it.

Now you know the reason why people think that the game isn’t real although a video of it on YouTube has been watched over 1 million times.  At least they are trying to make the game a bit more exciting by using mean expressions in between games. And they are also claiming that the tazing is very painful, but we understand that the taser used is not as powerful as the ones used by the police.

But Canadian Eric Prum, the sport’s founder, is serious about the sport and will be organizing a tournament in March in Bangkok. The four teams participating are Philadelphia Killawatts (are these guys serious?), San Diego Spartans, LA Nightlight and Toronto Terror.