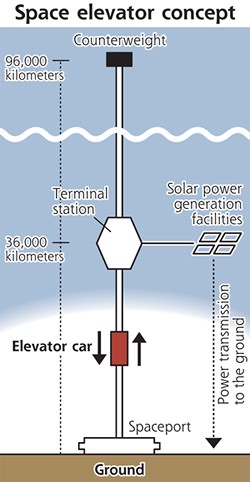 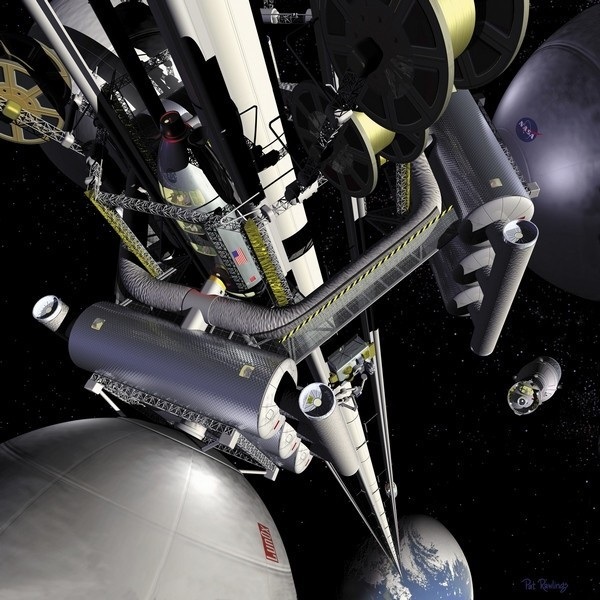 Are you amazed after hearing about the travel distance of an elevator in the Burj Khalifa? Then get ready for this new concept from Tokyo-based construction company Obayashi Corp. The Japanese company has come out with their space elevator concept which involves constructing a space cable, which extends a quarter of the way to the moon from the Earth’s surface.

If you are thinking that this is a crazy new idea, the concept of a space elevator has been around for decades. Inspired by the Eiffel Tower, Russian scientist Konstantin Tsiolkovsky, who introduced a concept of a free-standing tower reaching into space way back in 1895. In recent years, the topic has been discussed in many conferences and even NASA is interested in it.

Expected to become a reality in 2050, the Japanese space elevator design features a 96,000 kilometer (59,652 mile) cable made of carbon nanotubes extending into space from a station on the ground. There will be a counterweight at the end of the cable to hold the entire thing in place.

The vehicle carrying the passengers (30 at a time) and cargo will be travelling along the cable with speeds of around 200 km/h. Their destination will be a station with residential facilities and a research center 36,000 kilometers from the surface of the Earth. At the above said speed, the elevator journey might take about a week (no, you won’t be standing all the way). As you can see in the above figure, electricity for the terminal station will be generated via solar panels.

But the company isn’t talking about how much all this might cost (trillions?), or where its location will be (most likely somewhere around the equator as centripetal forces are required for keeping the cable stretched), or about the risks involved (bad weather, or an issue with the counterweight which could result in the cable becoming a waist belt for our planet).