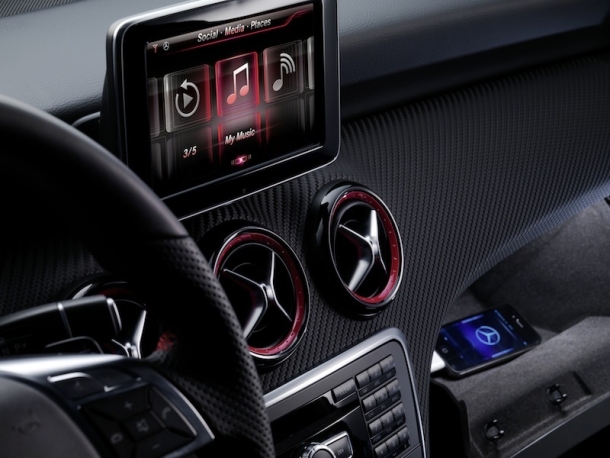 What’s better than using Siri to navigate through your iPhone? Using SIRI to control many of the functions in your Mercedes-Benz A-Class, that’s what. That’s right, Mercedes’ Digital DriveStyle App and Drive Kit Plus for the Apple iPhone will now tightly integrate iPhone controls into the vehicle’s electronics platform.

What does this mean exactly? For one thing instead of memorizing the car’s commands for controlling things like music and twitter, you will be able to use Siri commands, which should certainly make things a little easier.

It will also allow a special driver controller knob to change music from the iPhone and even post things to the net. Which applications can actually be used will largely be up to Mercedes-Benz, but we do know that Twitter, Facebook and Aupeo! Personal Radio (similar to Pandora) have been tested and seem to work with the new system. The app also adds Garmin navigation which seems to replace CD or DVD-based systems.

This likely means that Mercedes-Benz will be the first manufacturer to integrate SIRI technology into vehicles, but you can pretty much guarantee they won’t be the last.